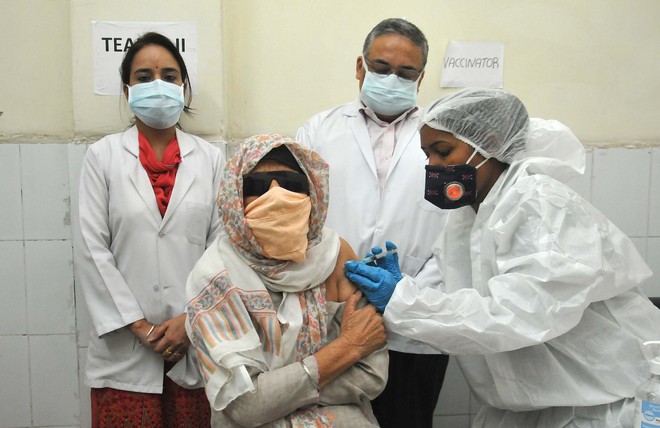 With the rise in Covid cases every day, another worry which haunts the doctors is the increased and relatively quicker pace at which corona is impacting lungs of the Covid patients being reported. While 32 of the 56 hospital beds at the ICU of the Civil Hospital here are currently taken up by Covid patients, doctors say compared to the strain seen last year – the frequency of the Covid patients requiring non-invasive ventilation has seen a very dramatic rise this year.

Hoshiarpur: Out of 2,496 reports received in the district on Saturday, 195 persons tested positive for Covid-19 taking the tally to 14,154 in the district. With the death of six more patients, the toll also rose to 568. Civil Surgeon Dr Jasvir Singh said the samples of 2,016 persons were taken in Hoshiarpur district on Saturday. As many as 12,990 persons have recovered and there were 1,645 active cases. Of the new positive cases, 16 cases were related to Hoshiarpur city, while the remaining were from different health blocks of the district. Two deaths due to Covid-19 were reported from Amritsar and Jalandhar hospitals, two at Civil Hospital, Hoshiarpur, and two more at Civil Hospital, Dasuya. OC

While January and February saw 32 and 30 deaths, respectively; in March a whopping 195 deaths took place. In the first three days of April – 22 deaths have already been reported in the district. Nine deaths (each) were reported on April 1 and April 2 and four deaths were reported today.

Doctors advised vaccination as the most effective solution to escape the severity of the new strain. While the Civil Hospital even saw days when 40 to 42 beds of the 56-bedded ICU were housing Covid patients, doctors suggested that getting vaccinated is the most effective way to prevent the Covid infection.

Anaesthetist Dr Paramjit Singh, who has been at the frontlines of the Covid pandemic ever since it hit the district last year, said, “In the strain seen last year, a patient was getting severely sick only after 5 to 8 days. But in the new strain the lungs are getting involved very soon. This can clearly be seen. Patient who reports after considerable delay now has much more greater chance of having serious lung damage. Earlier, preliminary symptoms like lack of taste, sore throat or cold were signs which people could act on timely to prevent damage. But with the newer strain the effect to the lungs is quicker and often without warning.”

Dr Vijay Mahajan, MD, Tagore Hospital, said, “The present wave of Covid-19 infection has some special features. A majority of the infected people have infection due to UK variant strain. This strain is highly infectious and is involving mostly all members of the family whether young or old. Even small children are getting infected. The most important feature of this virus is that it directly infects the lungs rather than infecting through nose and throat. So symptoms related to nose and throat are minimal. In view of the direct involvement of the lungs, the chances of patient having a severe lung infection are very high. This is one of main cause of increase in death rate during the current wave of Covid infection. Hence, people need to be more conscious and get themselves vaccinated as per norms and strictly observe Covid protocols.”