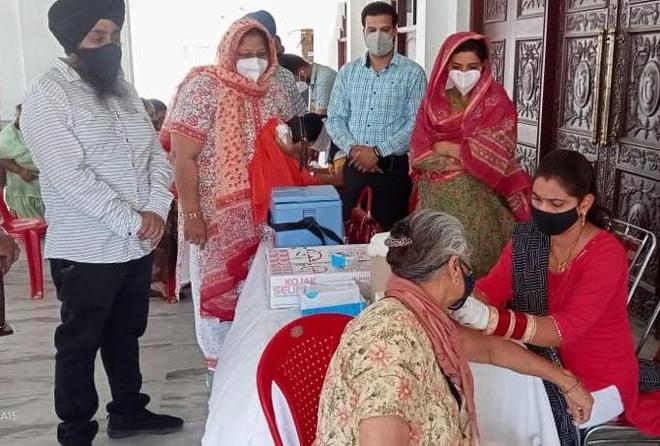 A Central team, led by Additional Secretary VK Singh, on Tuesday, took stock of the situation in the district, besides directing to further expedite the pace of the ongoing testing and vaccination drives.

Holding a meeting with officials of the district administration and the Health Department, the Additional Secretary asked them to ramp up contact tracing so that the chain of transmission could be contained effectively. The team also expressed satisfaction over the concerted efforts being made by the administration for controlling the spread of the virus.

Deputy Commissioner Apneet Riyait apprised the team that all requisite arrangements had been put in place to assist Covid patients as there were 212 level-II beds and 110 level-III beds available in the district. Efforts were afoot to increase the number of beds in private hospitals too, said Riyait, adding that special focus would be on isolation monitoring. Besides, the Covid patients would get support from the Punjab Government, including mission fateh kits and health enquiries on telephone.

The Deputy Commissioner informed that the vaccination drive was going on smoothly on a large scale as the administration had solicited wholehearted support and cooperation from social, religious organisations, NGOs, elected representatives and other prominent personalities, which received an enthusiastic response.

She pointed out that more than 90 per cent beneficiaries were inoculated with the first dose of Covid vaccine in which the district police played a significant role to ensure the vaccination.

The team stressed that maximum people both in urban and rural areas should be apprised that they should wear mask properly, wash hands frequently, avoid unnecessary travelling, and maintain social distancing as these were the keys to keep the virus at bay.

On the occasion of Baisakhi, the district administration organised special camps in different gurdwaras, where devotees received the jab of Covid vaccine in a large number. Deputy Commissioner Apneet Riyait and all SDMs visited these special camps to boost the morale of health teams and beneficiaries. While extending greetings to people on Baisakhi, Apneet Riyait lauded the tireless efforts of health teams and others who were working day and night to contain the spread of the virus. She said as many as 58 teams were deployed to inoculate eligible beneficiaries in the district, which administered the vaccine to 2,138 people. Of these beneficiaries, 687 were vaccinated in different gurdwaras. She urged people that vaccination was must in the present circumstances. She appealed to people to follow the Covid safety protocols and behaviour strictly as per the guidelines of the government and the Health Department.