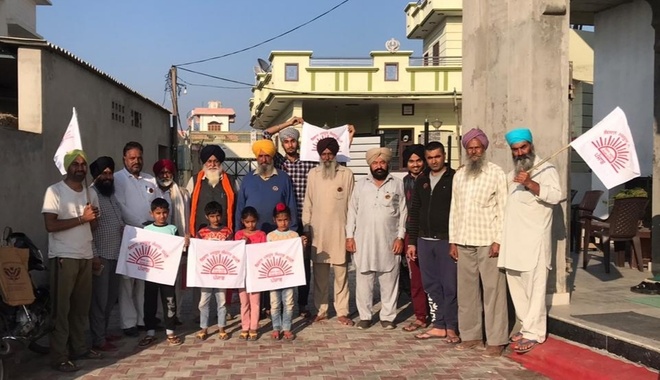 Farmers, including children, protest against farm laws at a village in Shahkot. Tribune photo

From collecting money and ration from every household to making arrangements for tractor-trailers, the Lohian and Shahkot-based farmers are doing everything to join protesting farmers on the Delhi-Haryana border.

Equipping themselves with all essential supplies these days, the next convoy of Shahkot and Lohian farmers will leave for Delhi on December 11.

To lend more support to farmers in Delhi, farmers here are leaving no stone unturned. Apart from conducting daily meetings, local farm unions are making announcements in villages to gather all essentials such as dry ration, quilts, temporary tents, mattresses and tarpaulin among other things. “This is happening for the first time. The entire farming community, including women and children are angry as well as excited to join the protest. It’s hard to remember when such support was given to farmers from all over the country,” said Lakhwinder Singh, an elderly farmer from Lohian block.

Gurmail Singh, Shahkot zone president of Kisan Mazdoor Sangharsh Committee, said: “With the government keeping firm on its decision, the enthusiasm among farmers and their families is rising equally. After chalking out a plan on December 5, we will also send nearly 150 tractor-trailers to Delhi with over 500 farmers. Locals are coming forward with their share of dry wheat grains to be used for protest. Daily visits are being made to commercial flour mills for grinding wheat grains. To make arrangements for tractors and fuel, funds deposited in the village committees would be utilised,” Gurmail said.

As a large number of farmers, including youth, have gone to the protest site, villages here are wearing a deserted look. In the absence of sufficient number of hands, seasonal crops could also not be sown this year. Srawan Singh (57) said, to ensure availability of all resources, NRIs from our villages were also making donations and praying for our win. “This will be a lesson to any government so that they don’t play with the sentiments of farmers who produces food,” Srawan said.

Terming it as ‘historic’, people in our village are donating meals and beds with open heart, said Harpeet, who is managing fields these days as his father has left for the protest.