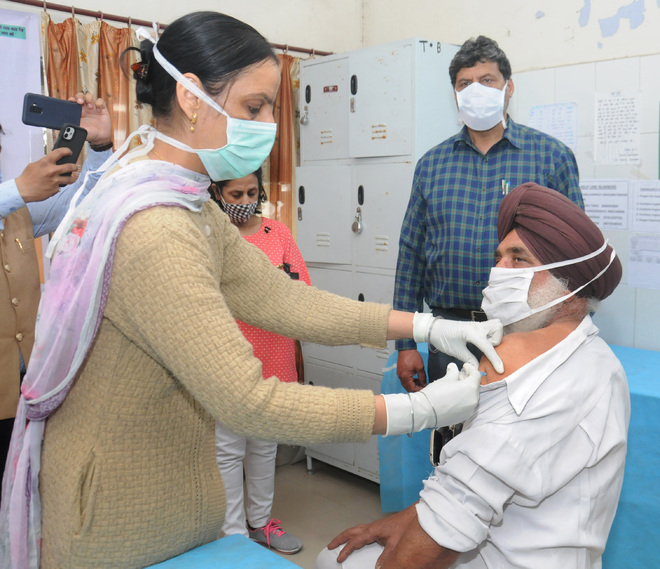 None of the private government-empanelled hospitals in the district participated in the second phase of the vaccination drive for the elderly and those with comorbidities on the first day due to glitches in the Covid portal.

While there are a total of 72 empanelled hospitals in the district, they could not start vaccinating the elderlies and comorbid beneficiaries as none of them could be registered in time. Almost all new beneficiaries were primarily reported at the Civil Hospital.

While there were about 13 vaccination centres in the district as well, those getting Covid shots also faced problems, as most of the centres didn’t show up on the app, where they were getting registered. Also, none of the centres in Jalandhar started administering the Bharat Biotech Covaxin on Monday. As per health authorities, Covaxin doses won’t be administered on Tuesday either. While some hospitals tried registering all day, they were unsuccessful.

Dr SPS Grover, director, New Ruby Hospital, said: “After repeated attempts, we were told by the health authorities late in the afternoon that we first have to buy the vaccine, make payment to a certain account after which we will get registered. By the time we bought the vaccine, it was late as banks were closed. So, we will deposit the money in the account tomorrow morning. We have been assured that we will get registered by tomorrow. While the portal was slow, there were some communication gap as well. Only today, we got to know that our own staff shall administer the vaccine, they will not get any prior training and we have to first buy the vaccine to start registration.”

District Immunisation Officer Dr Rakesh Chopra said: “The format of the entire portal has been changed and many new features have been introduced. It took health personnel some time to figure out the new technicalities. Due to the first day, the website was slow. Hence, some problems were faced. Private hospitals also couldn’t start working today due to similar reasons. The portal was very slow. Yet, 85 first doses were administered on Monday. At least two to three private hospitals have taken the vaccine already. In all 72 empanelled hospitals, we expect over 20 to begin administering the vaccine on Tuesday.”

Of the new beneficiaries of the new phase, elderlies were most keen on getting vaccinated.

At least 16 registrations of elderlies, who reported at the Civil Hospital, were carried out by the hospital staff on the spot. In all, 85 first doses were administered, which included frontline workers.

Dr Indu Bala, Nodal Officer, Covid, said: “Primarily, elderlies reported at the Civil Hospital, many of whom were not registered. Some were registered on the spot. Delay was also caused because we already had health workers to be vaccinated from previous phases and new registered beneficiaries as well as those who came without registrations. Since registered ones had to be attended to first, the non-registered ones had to wait. Also, being the first day, the portal was very slow and there were many new changes.”

Doctors said very few of those with co-morbidities between 45 and 60 years of age reported on Day 1.

Hoshiarpur: The district administration has declared Jaurian Mohalla of Garhshankar sub-division a micro-containment zone after eight persons tested positive in the last few days. Additional District Magistrate-cum-Additional Deputy Commissioner (ADC) Amit Kumar Panchal issued an order under Section 144 of the CrPC in the wake of the Covid-19 pandemic. He said only medical emergency and essential services would be allowed in the micro-containment zone. He said teams of the Health Department would conduct door-to- door survey and contact tracing at Jaurian Mohalla. In addition, all positive cases will be shifted to health centres as per protocol. The Additional District Magistrate said the area had been declared micro-containment zone for 10 days. He said legal action under the Disaster Management Act- 2005 would be taken against violators. The district reported three more fatalities on Monday, taking the death toll to 374, while 41 new cases pushed the infection count to 8,623 in the district. Civil Surgeon Dr Ranjit Singh Ghotra said seven cases were reported from the city and the remaining 34 were from various health blocks of the district. Three deaths include a 65-year-old Covid-19 patient from Babak village, a 80-year-old patient of Mohkampura village who died at Guru Nanak Dev Hospital, Amritsar, and a 66-year- old woman of Chabbewal village who died at DMC Ludhiana. There are 374 active cases in the district, while 8,086 have recovered. OC