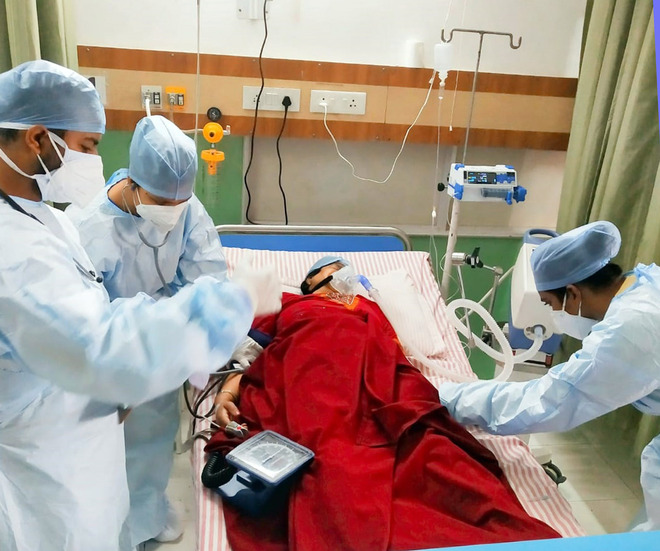 With first invasive aspergillosis case reported in the district, green fungus has joined a host of comorbidities associated with Covid-19. Earlier, the authorities reported 82 cases and 18 deaths from black fungus in the district.

Barring black fungus and multisystem inflammatory syndrome in children (MISC), no case of white or yellow fungus has been reported in the district. Doctors said there was no need to panic as green fungus was non-communicable and has less fataltiy rate than black fungus.

Dr Ramesh Gupta, Family Welfare Officer, Jalandhar, said, “As green fungus is not notifiable, we are not collecting information about it. As per instructions, only cases with mucor (mucormycosis) are notifiable. There are 82 cases reported in connection with mucormycosis, which include both suspected and confirmed cases. The deaths (both suspected and confirmed) from black fungus are 18. Of the total 82 cases, 43 patients are from the district, 35 from other parts of Punjab and four from other state. Out of 18 deaths, 11 are from the district and rest from other districts. No green fungus case has been formally reported to us.”

Dr Ashutosh Dhanuke, consultant and pulmonologist, Critical Care Centre, Sacred Heart Hospital, Jalandhar, said: “Fungus is present everywhere in our environment for ages. There is no need to panic as green fungus is non- communicable and unlike black fungus it doesn’t require surgery and can be cured with medical treatment. Patients with green fungus have a 50 to 60 per cent chance of survival. If treated, fatality rate is much lower.”

Dr Dhanuka said, “Allergic aspergillosis is pretty common, especially among those having asthama, and it can be cured easily. The one we tested yesterday is invasive aspergillosis, which invades lungs and weakens tissue. It is more severe version of the fungus.”

He said diagnosis of this disease is complicated and rare. “In most cases patients are given tuberculosis medication as it occurs rarely and most doctors cannot diagnose it. A positive culture, coupled with immune wekaness and compatible CT findings are imperative to come to the conclusion that patient may be suspect. In non-immuno-compromimsed person it is not even a concern. In this very case, the biopsy report found that the fungus was invading lung tissue. That was a sure diagnosis that the fungus had penetrated lungs.”

Speaking about the 61-year old patient, Dr Ashutosh said the patient is currently stable and has been taken out of the ICU. After some days, CT scans will be done to monitor further progress, he said.