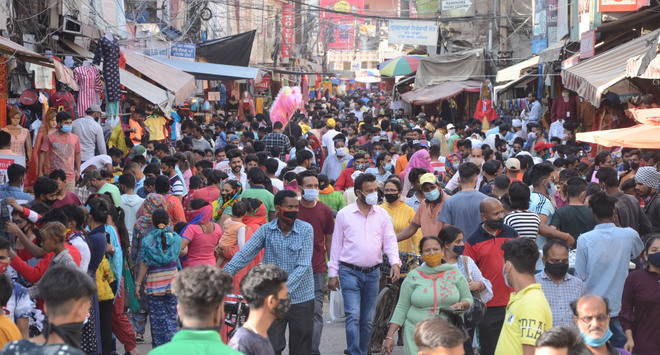 Corona pandemic is no deterrent for the residents of Jalandhar who continue to flock in large numbers to the Sunday market.

The district on Sunday reported the deaths of four persons. Besides, the district recorded 445 fresh cases with a large number of people walking along the streets without wearing a mask. A huge rush of residents was witnessed at the Sunday market.

A Jalandhar resident, who just recovered from the infection, said, “Those who tested positive and had been on oxygen can understand the seriousness of the situation. The fact that many people still do not even wear a mask is very worrisome. It’s like an open invitation to Covid. There are funeral grounds which are running out of space and irresponsible crowds at a single place points to lack of seriousness of the problem among people.”

Meanwhile, 36 persons tested positive in Kapurthala, taking the tally to 10,888. Three deaths were reported in the district.

The district reported two more fatalities on Sunday, taking the death toll to 667, while 268 fresh cases pushed the infection tally to 16,454. Civil Surgeon Dr Ranjit Singh said the number of active cases in the district stood at 1,355 and 15,788 patients had recovered from the virus. Of 268 positive cases, 16 were reported from other districts, 22 from Hoshiarpur city and the remaining from other health blocks of the district. A 50-year- old patient of Bhunga died at Jalandhar hospital, while a 42-year- old woman of Bank Colony in Hoshiarpur city died at Amritsar Medical College.