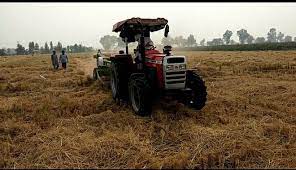 Gearing up for the elimination of paddy straw burning in the district, Deputy Commissioner Ghanshyam Thori today appealed to the farmers not to resort to stubble burning as the smog from the fire can aggravate problems for the people, especially Covid-19 patients.

Presiding over a meeting with the officials of departments concerned, the DC termed i-Khet app a revolutionary step where farmers could check the availability of machinery at block level. He said 3,858 machines, including super seeder, mulchers, RMB plough, happy seeder, Super SMS, are available in the district, which can be viewed through the app.

The DC also issued on-the-spot sanction to a total of 118 cooperative societies, farmers’ groups and panchayats to purchase new machineries and directed customer hiring centres not to charge rent from small and marginal farmers for the crop residue management machinery they sought from them.

The DC said a multi-pronged strategy ranging from awareness campaign to action against defaulters would be adopted to curb stubble burning practices in the district adding a comprehensive plan was already put in place to keep a close tab over such incidents. He further asked officials to keep a close tab over the farm fire incidents by ensuring physical verification in each case.

Thori said to ensure that no erring person could escape from action, strict vigil was also being kept through remote sensing satellites. He said the satellites would detect the place where any burning of paddy straw has taken place and subsequently the administration would take action against the person involved in it. He directed the SDMs to ensure all combines were equipped with Super SMS technique and take action against those not complying with these directions.