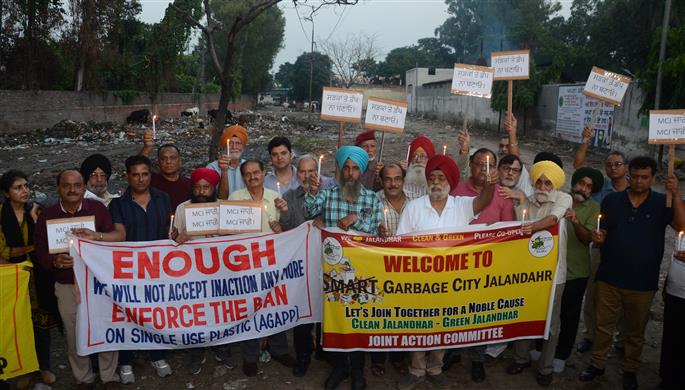 UP IN ARMS: Residents protest the dump site in the Model Town area of Jalandhar on Friday. Photo: Sarabjit Singh

In their ongoing protesting against a dump site, residents of the Model Town area today held a candle march. They said the march was held in the memory of those who lost their lives due problems arising from the dump site.

Flies are everywhere and there is no respite from foul smell. The dump also attracts stray cattle which litter the entire surroundings. We are disappointed that still there is no answer from authorities. Col Lakhwinder Singh, President, Kewal Vihar Cooperative Housing Maintenance Society

Jaswinder Singh, president, Joint Action Committee, claimed because of bad smell, pollution and filth everywhere, many had lost their lives. “It is a torture for all of us,” he added.

The protesters were seen holding placards like ‘Not smart, but welcome to Garbage City Jalandhar’ and ‘Enough is Enough’.

Environmentalist Sant Seechewal also reached the site today and the protestors told him about the problem. He said the area required beautification.

Councillor Balraj Thakur met the MC Commissioner yesterday after which the latter had asked him to give him two days to find a proper solution. No one can rob us of our right to live in clean and hygienic condition. We have not only taken up this matter with the Municipal Corporation, but with officials at the state-level.

We have written to the Chief Minister, but still nothing has happened,” members of the committee had earlier said.

Col Amrik Singh (retd), president, Kewal Vihar Cooperative Housing Maintenance Society also said the garbage dump was located along the boundary of their housing complex and it had made the lives of the veteran soldiers and their families miserable.

He added: “Residents of the colony were already subjected to health risk due to the presence of a cremation ground. The garbage dump along the boundary of our colony, too, is adversely affecting the surrounding environment.

Flies are everywhere and there is no respite from foul smell. The dump also attracts stray cattle which litter the entire surroundings.” The residents said they were disappointed because they had got was no answer from the authorities.