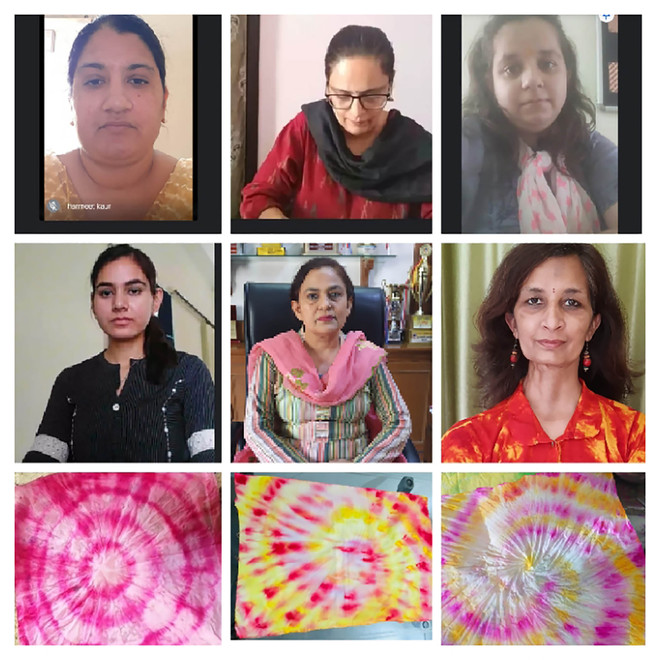 An online workshop on vegetable block printing was organised by the Department of Fashion Designing and Home Science by Kamla Nehru College for Women at Phagwara.

Jalandhar: An online Fevicryl workshop was organised on ‘Vegetable Block Printing’ along with ‘Tie and Dye’ with Fevicryl Colours by department of fashion designing and home science. Dr Priyanka Aeri, Head, Department of Home Science extended virtual welcome to the resource person Ritu Lal, a professional trainer of Fevicryl Company. During this workshop she gave live demonstration on various techniques of Tie and Dye like Shibori, a Japanese Technique, Bhandej (Rajasthani Technique) and many other methods of Tie and Dye. She also gave demonstration for making vegetable blocks for doing Block printing at home. A total of 65 students, including faculty members attended the workshop.

Paying a well deserved tribute to “the work and the worker” on the eve of Labour Day, Mayor World School organised virtual activities for the students. Learning the value of money in a fun way, the budding Mayorites of Grade I and II showcased their crafting skills by making their own piggy banks. The zoom sessions of Classes III to V were filled with gusto as the students prepared ‘Thank You’ cards enfolding a beautiful note extending gratitude to their helpers for relentlessly working round the clock performing assigned duties with sincerity. In the brain teasing activity ‘Jobs on the Cob’ conducted for Classes VI to VIII, the students were instructed to make an English Alphabet chart and write as many job titles as they could think of against each letter. The young minds listed different fields of work ranging from astronaut to zoologist.

State Public School, Jalandhar Cantt, organised an online Inter-House World Heritage Quiz Competition on the eve of World Heritage Day. All the four houses enthusiastically participated in the competition imbibed with positive and progressive approach. The competition was tough as each participant was well prepared for the same. Sahibzada Zorawar Singh House bagged the first position. President Dr Narotam Singh along with principal Savina Bahl appreciated the efforts done by the students and encouraged them to give their best performance in future.

A team of the Institute’s Innovation Council of HMV College organised an interactive session to mark the World Intellectual Property Day with the support of Principal Prof Ajay Sareen and under the coordination of Dr Anjana Bhatia, In charge of the council. The session was organised in collaboration with Punjab State Council of Science and Technology and Dr Jatinder Arora, Executive Director, PSCST presided the session as the chief guest. The keynote speaker was Divya Kaushik, scientist, Patent Information Centre, PSCST. The worthy guests were cordially welcomed by Dr Kanwaldeep Kaur, Dean, Academics and HoD, Commerce. Principal Dr Ajay Sareen highlighted the role and importance of IP in the educational institutions. Dr Jatinder Arora apprised the students with the current status of Intellectual property awareness in the country through statistical figures and evidences.

The department of computer science and engineering of Lyallpur Khalsa College Technical Campus, Jalandhar organised one week Capsule programme in association with training and placement department on ‘Aptitude Skills’. The 30-hour programme prepared students for placements and encapsulated rigorous aptitude preparation, mock interviews by industry partners, and employability enhancement tests. The resource person of the programme was Anshul Wadhwa, Co-Founder, Aptiguide. Anshul is an IIT pass-out and professional aptitude trainer. He gave tips and tricks of attempting aptitude tests and effective communication skills required during the interviews. Around 130 students from various dept. such as CSE, ECE, ME and CA registered and attended the capsule programme.

Hoshiarpur: Water Conservation Club and Social Awareness Club of the DAV College of Education, Hoshiarpur, organised an online E-Poster Making Competition on “Water Conservation” under the guidance of Dr Naresh Kumar and Poonam Mehta. The motive of this contest was to spread the awareness regarding the scarcity of water among trainee teachers. Dr Harvinder Kaur and Dr Monika were the judges of the event. Harpreet Hani got the first prize, Gurleen Kaur got the second prize while Priya and Simrandeep Attri jointly bagged the third prizes and Priya, Harsimran and Pooja Rani got the appreciation prizes. TNS/oc