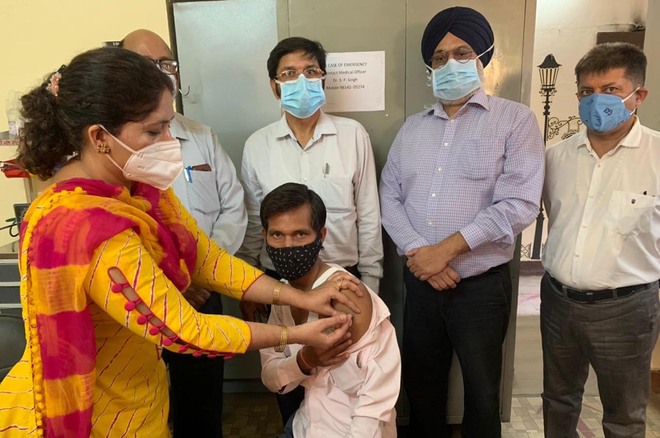 A construction worker gets the jab at the Kapurthala Civil Hospital.

Even as a special drive for vaccination of the construction labourers of age group 18 to 44 years was launched today in Jalandhar district, only 40 labourers took the jab on day 1.

The turnout remained low despite the fact that the officials of the Labour Department kept on calling the builders, contractors and labour union leaders asking them to send in workers for taking the vaccination. To facilitate the labourers and to ensure that they had to travel less distance, seven sites were set up at different locations in the city areas.

Dr Rakesh Chopra, District Immunisation Officer, Jalandhar, said: “Since it was the first day, the response remained relatively less. After calls made by the labour department today, we are expecting a better response for this drive from tomorrow onwards. We have even told the department that we were ready to take the teams to a site of construction where 50-100 labourers were involved for work. We are even trying to convince the labourers that we will give them a preference at least for one week over other categories of people and that they should avail the maximum benefit”.

The drive was also launched today at Civil Hospital Kapurthala and four other sub division hospitals of the district. Deputy Commissioner Kapurthala Deepti Uppal said that under the guidelines of the state government a free vaccination campaign has been launched in the district to vaccinate the workers class so that the economic activities must continue in public interest as well as to cater the workers class.

She said that under this campaign Punjab Construction and Other Workers Board would vaccinate the registered workers and the workers of engineering department. Uppal said that the eligible categories of immunisations would be informed by the state government from time to time so that the immunisation centres would not be crowded.

She also said the vaccination of construction workers would help in resumption of activities in the construction sector which would not affect the employment of the needy sections of the society. Dr. Parminder Kaur, Civil Surgeon, Kapurthala, has appealed to the people to follow the government guidelines and wear masks and refrain from going to crowded places. District Immunisation Officer Dr. Randeep Singh said that for this vaccination campaign five sites have been set up in the district under which Civil Hospital Kapurthala, Sub Divisional Hospital Phagwara, Sub Divisional Hospital Bholath and Sultanpur Lodhi besides ESI at Phagwara.