Open House: Should the drug problem be a key issue ahead of Punjab Assembly elections? 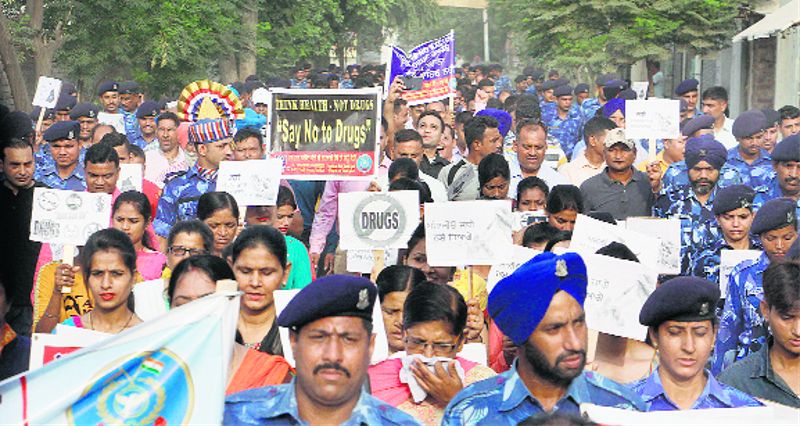 The scourge of illicit drug trade has spread its tentacles in Punjab over the past two decades, courtesy illiteracy, unemployment and easy availability of drugs. Tribune file

Punjab, the land of warriors and visionaries, has been unfortunately marred by the problem of drug menace. With the passage of time, the web of drug addiction has become more and more complex. Now, the situation has become so grim that addicts sell their property to buy drugs. They even resort to snatching and robbery to fulfil their desires. In many cases, it is commonly seen that youngsters fall prey to the labyrinthine of drug mafia. These days not only boys but girls also feel it ‘classy’ to try their hands on drugs. Of course, the rave parties and late night shows organised on the name of entertainment are exclusively responsible for that. No government has taken a strong stand against drug addiction. Before elections, tall promises are made by various political parties. However, once the elections are over, these promises are forgotten. The voters should give up their deep slumber and choose their representatives quite thoughtfully and wisely. Time has come to bring the guilty to book. I believe that the problem of drug addiction should be a key issue ahead of the forthcoming elections and the issue should be fixed before it is too late.

The scourge of illicit drug trade has spread its tentacles in the urban and rural areas of Punjab over the past two decades, courtesy illiteracy, rampant corruption, unemployment, easy and cheap availability of narcotics and porous borders with Pakistan and Nepal. Local, national and international drug traffickers involved in this lucrative business employ various methods to smuggle them into the state via Himachal Pradesh, Rajasthan, Jharkhand, Madhya Pradesh, Andhra Pradesh and Nagaland. Younger generation is the worst victim of drug abuse. It has affected every aspect of their lives like loss of lives, disruption of studies, retardation of physical, psychological and moral development, reduction in work performance, distortion of interpersonal relations and family breakdown, and leads to accidents, violence and poverty. Realising the need to resurrect a dwindling generation, successive governments have frequently promised to eradicate drug abuse and trafficking. Despite major drug seizures from time to time and punishing petty peddlers and policemen for their alleged role, nothing much has been done on the ground level. Drug menace goes on unabated as no meaningful action has ever been taken against drug lords who run a major smuggling and supplying network in the state with impunity because of their alleged links with powerful police personnel and political leaders across parties. Merely making it a key issue ahead of 2022 Assembly election will not suffice. Strong political will, strict enforcement of law and breaking the flourishing smuggler-police-politician nexus will check the supply and abuse of these highly addictive and life-threatening synthetic and psychotropic drugs in the state.

Though illicit drug trade is a national phenomenon, Punjab has seen an exponential rise in it in the past few years. Opium-based drugs such as heroin, poppy husk, cannabis and pharmaceutical sedatives are the most abused narcotics in the state. These have wrecked havoc on many young lives from each and every section of society, irrespective of their social status and income. Drug abuse gives rise to multiple socio-economic problems. It results in suicides and drug overdose deaths; impedes their physical, mental, intellectual and moral growth; drives them to criminal activities such as snatching, theft, robbery, eve-teasing and rapes; causes road accidents; creates emotional and financial problems for their family; burdens the public and private healthcare system; and drains national resources. From time to time, the ruling state dispensations have reiterated their determination to check the prevailing drug menace. It was a major poll issue in the last 2017 Assembly elections in Punjab with principal parties promising strict action against drug syndicates. Arresting common addicts, small peddlers and punishing DSP Jagdish Singh Bhola and other policemen involved in a multi-crore drug racket are good moves. But unfortunately, the Special Investigation Team (SIT) formed by the Congress-led government to enforce criminal prosecution of drug traffickers finally exonerated the prominent mafia men because of their alleged nexus with the top-ranking police officials and politicians.

Tackling this menace must be top priority

To tap the demographic dividend potential of Punjab, it is the responsibility of the political parties to address the problem the drug abuse. Extensive efforts are required at the ground level to tracing the origin of drug nexus. Being a border state, the influx of drugs in the state should be blocked to cause further loss. In addition to it, village panchayats and ULB’s could be incentivised by the government, if the former succeeds in declaring themselves as drug free zone, on the similar parameters envisaged under Swachh Bharat Mission.

All leaders of various political parties and social organisations should work in tandem to create an atmosphere of awareness among the masses against the menace of drugs. Before 2017 elections, Congress leader Capt Amarinder Singh promised that if voted to power the drug menace will be ended within a period of one month. Now, we have a new CM but the problem still persists. There is no doubt that the issue of drugs will certainly once again play a positive role in the coming state Assembly elections due to the seizures of drugs in the state by the various departments under Ministry of Home Affairs. There is always a question of accountability on the widespread prevalence of drug trade, but one thing is clear that Punjab is a border state and Pakistan have always tried to destabilise the unity and integrity in Punjab and also boosted cross border terrorism in the past. The menace of drugs have spoiled future of many innocent youths and even ruined their families and business. Youths are misguided in their teen age and become regular users of drugs. Recently, a massive haul of drugs were confiscated at a Sea Port.

Despite tall promises and claims by the political parties/governments to end the illicit trade of drugs, it goes on unabated. During the last Assembly elections, the Congress vowed to end the menace of drugs from the state, if voted to power. Later, winning the elections with convincing majority, the government launched a campaign to nab the culprits involved. But the move failed to yield the desired results, as the big-wigs from all political parties and several unscrupulous elements, mafias had joined the illicit trade to reap quick bucks. The supply of drugs from across the borders and various other places never stopped as a number of hooch tragedies and big haul of contraband drugs is reported every day. It is pity that these drugs have taken away several precious lives and households ruined but no accountability is fixed. The de-addiction centres set up to cure the habituated drug addicts and prevent the use of harmful drugs are proving ineffective and thereby earning the wrath of public. Ironically, at wedding celebrations and even during the elections, despite ban, liquor and some other kind of intoxicants are freely distributed to influence the voters. Therefore, unless the candidates with drug connections are held ineligible to contest elections by the EC and the government draws a fair policy to take drastic action against the bigwigs, the curse is difficult to be rooted out.

Job opportunities need to be increased

Drug problem in Punjab is still persisting with dangerous implications but it appears that the political parties are not going to prioritise it as their major issue in next General Election. Presently all major political parties are competitively engaged in wooing the people through offering freebies in different ways in many rather than focusing on drug menace. The frequency and the level at which drug seizures are reported by the security agencies indicate that the state is still in the grip of drugs so far as consumption of drugs and smuggling of contraband are concerned. There appears a sordid lack of political will on behalf of political and administrative layers in the state to eradicate the menace in totality. Otherwise there is no reason why the problem is still rampant in spite of being it a major political issue in the last general election. The persisting strong nexus between the political leadership, police and the smugglers need to be broken. Various cases pending before the courts have to be fast tracked to speedily punish the offenders. .

Government, society must act together

The menace of drugs is a very serious issue and its consumption has ruined future generations. The issue of drugs has always been an issue during elections. In the Punjab Assembly elections 2017, the major focus was on the synthetic drugs. The recent haul of drugs seized by the police clearly indicates that this time also the issue of drugs will be once again a major poll plank in the coming Assembly elections. Social organisations and society as a whole should come forward to highlight the disadvantages of drugs through seminars in schools, colleges and in their areas educating the masses, students towards the negative effects of consuming drugs. Similarly, the drug peddlers should be sent behind the bars because they are spoiling the future of the country specially the youths. No doubt the government is running rehabilitation centers for those who are drug addicts where they can get cured.

Vote for those who address such issues

With the next Assembly elections approaching near, the ruling and the opposition parties have started luring the electorate with freebies. Should the sops or good governance be the priority for seeking votes?

Suggestions in not more than 200 words can be sent to jalandhardesk@tribunemail.com by Thursday (October 14)