Open House: Was the recent decision of aggrieved PCS officers to proceed on mass leave justified? : The Tribune India

Open House: Was the recent decision of aggrieved PCS officers to proceed on mass leave justified?

Dialogue, not strike, best way to resolve all issues 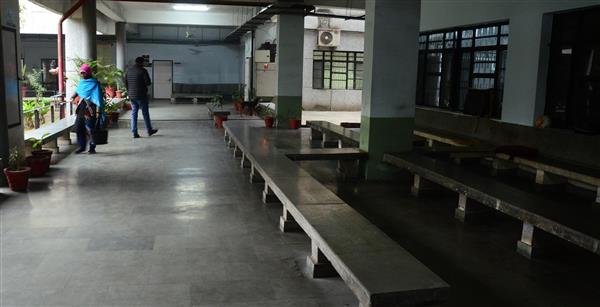 The District Administrative Complex, Jalandhar, wears a deserted look owing to a strike by the PCS officers’ association

Such action uncalled for from officers

The recent statewide strike by PCS officers was uncalled for. The job of PCS officers is public-oriented, and due to a high-level of illiteracy in our country, people need their help in resolving their problems. Moreover, many are not awareness of public policies and laws. In such a situation, Punjab needs dedicated PCS officers who should work consistently. Moreover, the rank of PCS officer is highly respectable and hence people don’t expect strikes from them. Yes, there are already dedicated PCS officers who in addition to their office work, also talk directly at people forums. In case of any genuine problem of such officers, they already have their unions that should work in tandem with the government on a regular basis and resolve all pending issues through a dialogue with the government.

Solve all problems through talks only

More than 30,000 civil servants, including those working in the Revenue and Customs Department, went on a strike over certain issues pertaining to — salary, pension, and job security. According to them, hard workings members of their fraternity are fed up and angry at the way in which they are being treated by the government. They alleged that the government was taking them for granted. They went on a mass leave to protest the arrest of a fellow official. It is a very strange behaviour by them to protect an alleged corrupt colleague using arm-twisting tactics and pressuring the government not to take any action. But this time the government took a firm stand and did not budge. The CM issued a warning to call off their strike and resume their duties. It is a big move against corruption. The strike should be the last option because in the end it is the common man who suffers. Problems should be solved through dialogue.

If a PCS officer in Ludhiana was caught by the Vigilance Bureau on a charge of corruption, why did the others go on strike? The Vigilance Bureau has a right to arrest any officer. Vigilance sleuths must have got some reliable information about the officer concerned so they apprehended him. Even if for a moment we assume the arrest was unjustified, how can we justify the response of senior officers, who put people at large at inconvenience? Chief Minister Bhagwant Mann’s warning to them only indicates that they were wrong in taking the decision to strike work. All such strikes by officials and staff of any department only trouble the general public. Even recently ambulance drivers were on strike, which caused inconvenience to patients as many of them couldn’t get timely medical aid. Democracy allows strikes but pressure tactics to hold the state to ransom.

Officers have no right to inconvenience public

In a democratic set-up every citizen has the right to protest. But the protest should be symbolic rather than a source of inconvenience to the public. During the agitation against the farm law Acts, farmers blocked the roads and rail tracks, and the sufferer was the common man. Similarly, PCS officers in Punjab had some grievances against the government, and they recently went on a mass leave. Due to the strike, the work of the general public was delayed. If the PCS officers had grievances, they would have taken up the matter with the competent authorities, which would have taken the issue seriously and found an amicable solution. Viewing the inconvenience faced by the general public, Chief Minister Bhagwant Singh Mann had to issue an order warning the PCS officers of strict action. Following which, the PCS officers resumed their duty. The PCS Officers in order to clear their backlog even worked on Saturday and Sunday. The strike by the Class-I officers create inconvenience to the general public. It will auger well if the government employees working in various departments before proceeding on mass leave/strike should raise their issues with competent authorities so that an amicable solution could be found without putting the common man at inconvenience.

Image of PCS officers has taken a hit

There are great expectations from the officials engaged in public service. However, it is strange that senior public servants of the Punjab Civil Services recently preferred to go on mass casual leave in support of ‘tainted officers’ arrested by the State Vigilance Bureau. In utter disregard of public convenience, many others joined their agitation, creating chaos on roads and offices by recurring blockades and protests. When delinquent officers did not relent to fair probe assurances, Chief Minister had to issue strict orders that aired out a message for all to realise that the duty and obligations came first while claiming rights and other liberties. In a democratic set-up, administrative officers are regarded as honoured public servants. They are expected to discharge duties honestly and efficiently in accordance with the rules and policies so that people get fair and impartial services without disruption of any sorts. IAS and PCS officers are held in high esteem owing to coveted position and bureaucratic powers vested with them, but this illogical stir shielding a colleague involved in graft charges has severely dented their prestige!

Apparently, the strike by PCS officers was not justified as their foremost duty is to serve the citizens, and such moves become an epitome of abdication on their part and are contrary to their work commitments or decorum! The repercussion — working weekend resulted in a more tedious, hectic, uphill work schedule for them, besides hampering the smooth functioning of their respective departments and timely completion of requisite assignments and a delay in gratification of public needs. The officers should have acted prudently, legitimately, believing in the VB’s probe. It is imperative for the officers to value their job, in lieu of the respectable status and privileges they are endowed with by the government and the common people. After all, ‘Work is worship!’

Work in offices should not be hampered

It is unfortunate that PCS officers across the state proceeded on a five-day mass casual leave in protest against the registration of a case and arrest of an RTA official at Ludhiana. Several other unions, including the Punjab Revenue Officers’ Union, the Deputy Commissioner Employees’ Association and the Confederation of Associations of Excise and Taxation Department, also joined the strike in a show of solidarity. It not only impacted the government functioning and caused great inconvenience to the general public, but also posed a challenge to the current AAP dispensation in fulfilling its commitment to the electorate. Surprisingly, after the CM’s warning that strict disciplinary action would be taken if officers missed the deadline to resume their duties, the latter withdrew their protest. The PCS officers felt that in order to build its image, the government had tried to “defame” and tarnish the image of the said officer. It is good that a high-level committee comprising senior IAS and PCS officers has been constituted to look into the matter. Only a fair, unbiased inquiry will take the case to its logical end. If the alleged accused is finally found guilty, he should be straightway terminated and his assets should be attached. And if he proves to be innocent, a similar action should be taken against the erring Vigilance Department officials. Corruption is one of the major ills afflicting Indian democracy and it should not be tolerated at all.

It is shameful of PCS officers to go on strike. They are responsible for running the state administration and enjoy a lot of facilities, including handsome salary, free transport and security, on taxes payer’s money. All those supporting an alledged corrupt official should have been dismissed. Former Punjab CM Partap Singh Kairon once dismissed all the Patwaris, who went on strike, and enrolled new and honest persons. The strike by PCS officers is not justified by any means. The government should identify the corrupt and take them to task.

The recent strike by PCS officers was not justified. Resorting to such tactics in support alleged corrupt officials amounted to intimidate the state government. Other ways of getting grievances redressed should have been exploited before taking such steps, which aimed at throwing the administrative machinery of the state out to gear. Bureaucracy is meant for the effective implementation of government policies, let alone to obstruct the functioning of the government. Strong and speedy action of the government to deal with the strike and to form a panel for addressing grievances of PCS officers is laudable.

Some not happy with action against corrupt

Ever since AAP-led government came to power in March last year, it started its tirade against corruption. After starting an anti-graft helpline, it has taken strict measures and arrested about two hundred persons, including ministers, MLAs and government officials for accepting bribes. People are using this tool to expose the corrupt officials, who are hampering governance in the state. Recently, the Vigilance Department had registered an FIR against Ludhiana RTA NS Dhaliwal and arrested him in an alleged bribery and corruption case. The PCS officers went on a week-long strike against government’s “arbitrary and illegal” action claiming that their colleague was falsely implicated and arrested without following the due procedure. But this strike was totally unjustified as it hit services at the administration offices across the state and unnecessarily harassed the public. Taking it a threat to the government’s credibility, the CM issued a strict warning. After a meeting between a delegation of protestors and higher officials of the government, the matter was finally resolved. To dispense justice, the committee formed to investigate this graft case should hold a transparent and impartial probe to reveal the whole truth. The Vigilance Department should also arrest all the other accused in the FIR. Those who have allegedly looted public money and amassed property through unfair means, whether a minister, MLA or govt official should not be spared.