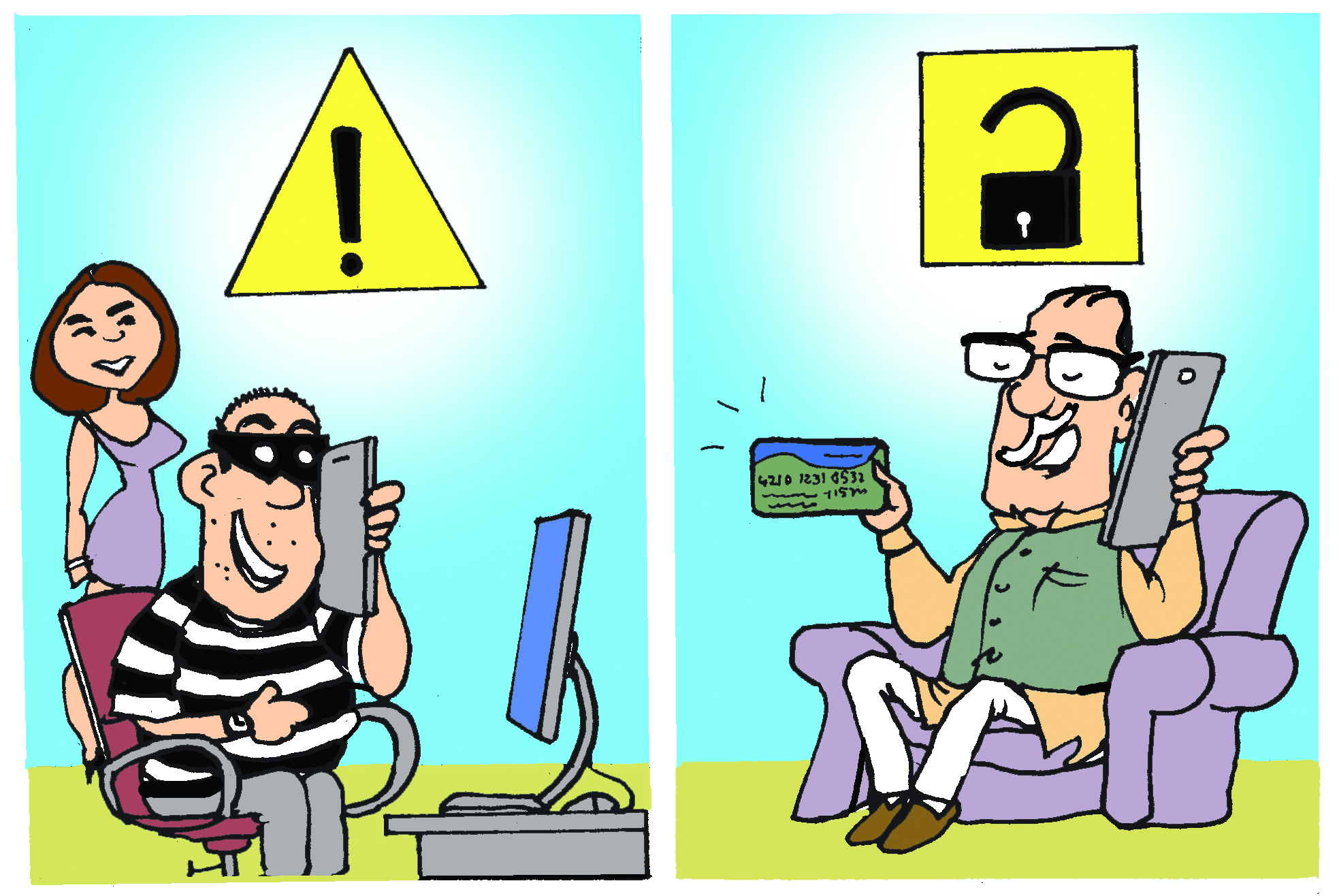 Report incidents of cyber crime immediately, protect your Wi-Fi, never send credit/debit card details on any untrusted site and use a trusted anti-virus for enhanced safety.

Cyber laws should be enforced strictly

The digitalisation of financial services has resulted in the ease of doing business and a lot of personal conveniences, but the inherent limitations of technology change are sometimes exploited by unscrupulous elements to commit serious frauds. In recent days, several gullible people have suffered significant losses due to such crimes and their number is increasing. The problem is getting accentuated as the safeguards to prevent cyber crimes, which involve not parting with own credit/debit card information or share OTP/security password to anyone, are not adhered to in letter and spirits by some of the users. As a result, cyber frauds are perpetrated easily and its detection becomes extremely difficult owing to the fake IDs, usages of stolen devices or obnoxious details left behind by the fraudsters. As such, cyber crimes have too become a common phenomenon due to our greater dependency on internet in daily activities. As per the reports appearing in media and the complaints lodged on designated websites/ toll free number 1930 for cyber fraud cases, the modus-operandi of cheating mostly pertain to hacking of accounts, private data pilferage, phishing individual safety codes, sharing of OTP, PW or through tempering/ creating fake IDs. Besides this, other basic reasons for falling prey to such frauds are the monetary inducements, emotionally blackmailing the innocent people etc by the perpetrators of crime. Likewise, the fraudsters also take advantage of the illiteracy, lack of awareness towards safety features among many people. The cheaters exploit gullible people, especially the aged and the illiterate persons under the pretext of assisting them in ATMs operations, online transactions and many more. However, the irony is that in most of the cases the fraudsters go scot free since the cyber cells investigating such crimes are either ill-equipped or not deployed sufficiently with trained and efficient manpower to trace them out. Evidently, the requirement is to have a National Cyber Crime Directorate on the pattern of ED with offices located in all over the states/UTs for surveillance and to coordinate with the local policing in unearthing the cyber offences. Alongside, the state cyber police IT cells should proactively sensitise public about do’s and don’ts to be followed while making use of the online technology. Cyber laws be tightened and enforced strictly for stern action against the criminals caught in such activities.

With widespread use of internet and accelerated digitalisation of financial transactions and services almost in every field, the incidence of cyber crimes has alarmingly increased in the country. According to the NCRB, 136 cyber crime cases were reported every day in the year 2020 and are surging rapidly with passage of time. The financial loss on account of banking related activities only rose to Rs.63.40 crore in the FY 20-21. The emerging trends of cyber offenses include hacking, identity thefts, spamming, phishing and cyber stalking resulting into over 60 per cent financial loss to the victims. Section 78 of the IT Act empowers the police to investigate the cyber offenses and as per section 154 of CrPC and it is mandatory for local police to register cyber crime FIR against the accused. However, the success of such statutory provisions largely depends upon the awareness level of the probable victims and the degree of police preparation to deal with such crimes expeditiously and efficiently. The police should start massive awareness campaign through every media to sensitise the public against all types of cyber crimes and various methods for prevention and protection. Toll free phone number services with support of e-mail facility and dedicated website should be kept operational for all the time to provide on the spot guidance to the victims. The provision of online FIR registration should be institutionalised by specialised cell of cyber crimes for quick and efficient investigation thereof under well documented SOP. The state government should seriously contemplate over creating specialised cadre of police comprising of experts from computer technology to deal with cyber crimes.

Awareness among people only solution

Innocent people fall prey of cyber crime due to their ignorance, innocence, limited education etc. Cyber fraudsters very cleverly forward attractive messages to people as a bait to know their OTP, passwords, CVV number and dupe people of their hard-earned savings. It becomes difficult for the banks and cops to trace the money. Awareness among the innocent people is the only a safety measure for the innocent people to keep themselves safe from cyber crime, simultaneously they should reject all the calls that try to involve the innocent people towards asking their balances, OTP, code, etc. Even though the innocent people are aware of the bank frauds, they give in lucrative offers promise to them by miscreants. The Police Department have already circulated their number for complaint of internet cyber crime but even then most of the people hesitate to contact the police authorities to lodge complaint. It is up to the masses to safeguard their interests with not disclosing your particulars to anyone except bank officials.

Cyber crime is on the rise as intellectual brains are misusing their ability in the negative side by hacking bank accounts, passwords and personal details. Heinous crimes such as ransomware, prostitution and child pornography are committed by them, which can destroy many lives. People have started depending on online services, which led to more data being put at risk so the number of hackers rose sharply and rising wave of cyber crimes. To be secure, keep an eye on the bank details and report any fraudulent transaction to the manager. To combat these scams, all agencies must be able to trace the source of hackers. It’s a challenge for the Police Department to keep a check on them; they need a strong mechanism to deal with cyber crimes in an effective and efficient manner. Some toll free number and social media channels can be helpful in creating awareness, alerts; advisories should be flashed time to time. We should be very cautious while opening any unknown file on the phone, spams and untrusted websites. Use strong password and use antivirus software. They try to allure in many ways but be safe.

The police and the government are making people aware of the cyber crime frauds. Now, it’s the responsibility of the citizens to make sure that they don’t get cheated by such fraudsters. The cyber crime cheaters lure the gullible people to make them rich by some investments on some mobile numbers and as soon as they do soothe fraudsters hack their account number from their bank and grab the money from their account number. What to talk of the ordinary folks, even the MP wife of the former CM of Punjab, was cheated by such hooligans. Though the money was subsequently recovered but it was a wake-up call for the ordinary citizens. Unfortunately the greed of the human being is unstoppable and this pushes them into doldrums. There was a news item in the papers that such fraudsters are very much qualified with good degrees like MBA and are computer wizards and operate from Jharkhand and some other places. The police and the government should make public aware of such cyber crimes. Already the Jalandhar police have published their cyber crime help number 1930 and this would certainly help to make people aware of the cyber crimes to protect them from getting cheated.

We need honest and efficient IT specialists

It is rightly concluded that with the advancement of information technology, the incident of cyber crimes have increased many folds. It should also be admitted that culprits are more expert in information technology than our crime detecting agencies. Hence, we should have much more efficient, honest and IT specialist as head of cyber crime branch in each district of the country. In cyber crime world online efficiency and perfect IT knowledge are pre-requisites. Just to quote an example, culprit ring up the victim on mobile and just inform that to continue the mobile services KYC renewal is necessary hence recharge your mobile with just Rs 10. As and when the victim do it, culprit with the help of the software at his end get the password of the transaction and withdraw the money from the account of the victim. Hundreds of such cases have been reported but no exemplary punishment has been giver to culprit when caught to act as deterrent for the future.

There has been a sudden spurt in the cases of murder, robbery, carjacking and petty street crimes in the recent past, leaving residents, especially women and the aged, in a state of shock. What should be done to check the rising crime graph and make residents feel safe and secure?

Suggestions in not more than 200 words can be sent to jalandhardesk@tribunemail.com by Thursday (May 19)