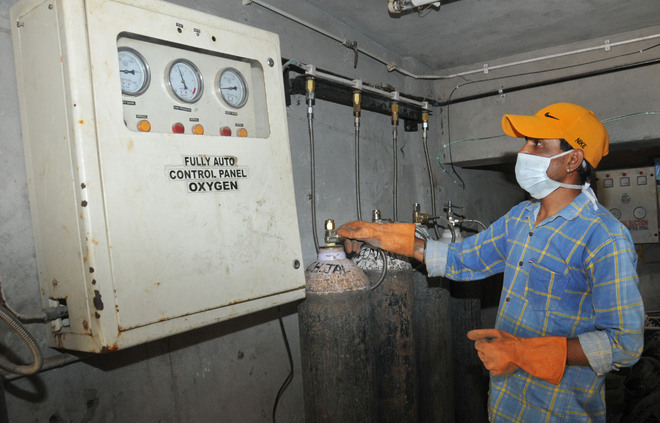 A technician refills an empty oxygen cylinder at the Civil Hospital.

To ensure optimum utilisation of oxygen in healthcare institutions, Additional Deputy Commissioner (Development) Vishesh Sarangal on Thursday directed audit teams to frequently visit all private hospitals and complete oxygen-audit at the earliest. While participating in a virtual review meeting chaired by state-level oxygen monitoring group, the ADC apprised the group members of the steps taken by Jalandhar administration to ensure optimum and rationalised utilisation of oxygen. Sarangal stated that on the directions of Deputy Commissioner Jalandhar Ghanshyam Thori, an audit was conducted in the Civil Hospital, Jalandhar.

The ADC added that similar audits were ordered in all private hospitals to check wastage and ensure its adequate demand and supply.The ADC said the whole exercise would aim at reducing consumption of oxygen by rationing its usage. He mentioned that every single drop of this gas was worth saving amid this pandemic, especially during these trying times. He also asked the members of audit teams to create a sensible approach in the hospitals so that wastage and misuse of O2 could be curtailed in the larger public interest.

While the DC had declared that audits shall be conducted ever since the audit at the Jalandhar Civil Hospital brought down the number of cylinders being used there, two teams have already been conducted to carry out the audits.

While currently 1,884 cylinders are being distributed across private hospitals and the Civil Hospital in Jalandhar, there is meagre vailability of liquid oxygen gas via transport which is being sought by the district administration.

An audit of private hospitals might help generate additional oxygen if more leakages are plugged.