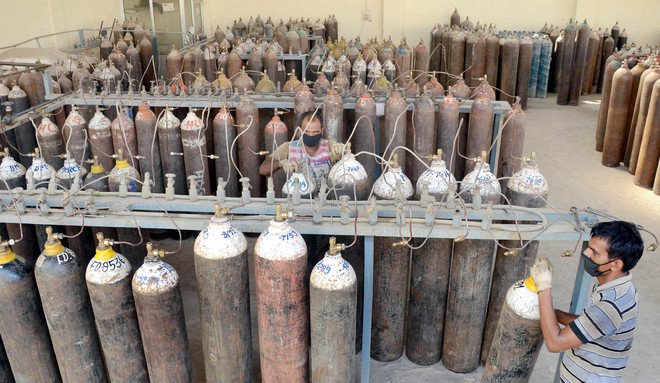 Jalandhar Deputy Commissioner Ghanshyam Thori on Wednesday ordered that the supply of oxygen cylinders would first be provided to hospitals and then to industry.

Deputy Commissioner Ghanshyam Thori on Wednesday ordered that the supply of oxygen cylinders would first be provided to hospitals and then to industry.

The oxygen supply in the district comes from three plants. As per the order, if any oxygen supplier (from the three plants) tries to supply oxygen cylinders first to industry over hospitals in need would be liable to action under the Epidemic Disease Act, 1897. 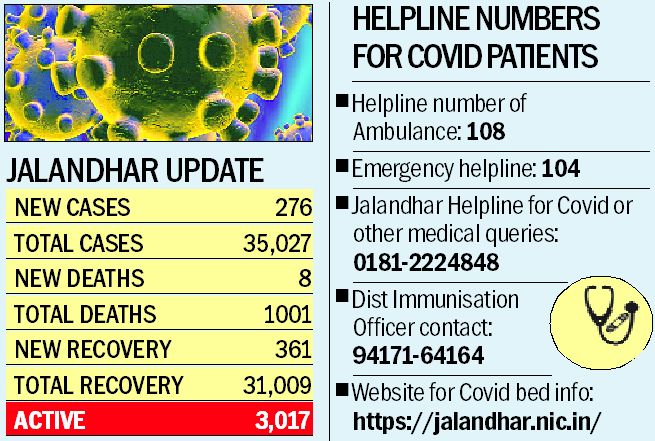 The orders come at a time when the district’s oxygen supply needs have almost doubled. As per suppliers, while 1,500 to 2,000 cylinders were required per day during the peak last year, this year the demand has risen to 3,000 per day.

However, suppliers and hospitals admit that the oxygen supply this year was smooth and no shortages were felt. While the Civil Hospital faced no problem of supplies after it got its own oxygen plant this year, other hospitals also claimed a relative smooth sailing compared to last year.

However, sources said the DC’s orders came as some suppliers were used to routing gas supplies to industries. But after this order, they would not be able to supply cylinders to industry first.

Udit Bhandari, one of the proprietors of Shakti Cryogenics (which are also the chief suppliers to the Civil Hospital, Jalandhar), said, “The majority of cases this year are asymptomatic. However, the caseload is certainly much. While we needed 1,500 to 2,000 cylinders per day during the peak last year, this year we needed almost double the amount. For the Jalandhar area, the current demand is 3,000 cylinders per day. Unlike this year, there was a shortage of cylinders last year. As we made all arrangements beforehand, we did not face any shortage.”

Dr BS Johal of Johal Hospital said, “Demand for cylinders has obviously doubled this year. At present, cases are on the wane. But during the peak a few days ago, we needed 250 cylinders per day. We have four high flow nasal oxygen canolas (HFNCs), each of which needs 10 to 12 cylinders every 24 hour.

But since the arrangements had been made, it was a smooth transition into the peak this year compared to last year when the cases were peaking. Last year we had sleepless nights over arranging supplies. While the caseload of Covid did increase, the suppliers are ensuring smooth supplies to us.”

Dr Neelkanth Singh Bhagat, anaesthetist, Civil Hospital, said, “We are facing no problem due to the in-house oxygen plant which produces 700 to 800 litres of oxygen per minute. It eases supply and provides us with 130 to 140 D type cylinders per day. While our ICU demand is 300 to 350 cylinders per day, 130 to 140 plant cylinders are used in the wards. So the per day demand of 400 to 450 cylinders is being met easily. Last year we were dependent on outside suppliers for 400 to 500 cylinders we needed during the peak. However, Covid is seeing a downward swing.”

Civil Surgeon Dr Ranjit Singh said the reports of 1,626 samples were received and of them, 178 new cases were reported while 17 more patients were reported from other districts. The number of active cases stood at 1,016 while 15,216 patients recovered from the infection.

Hoshiarpur city reported 18 new cases while the remaining ones were reported from various health blocks. Two patients died at Hoshiarpur hospitals, one at a Jalandhar hospital and one more died on way from Dasuya to Jalandhar.