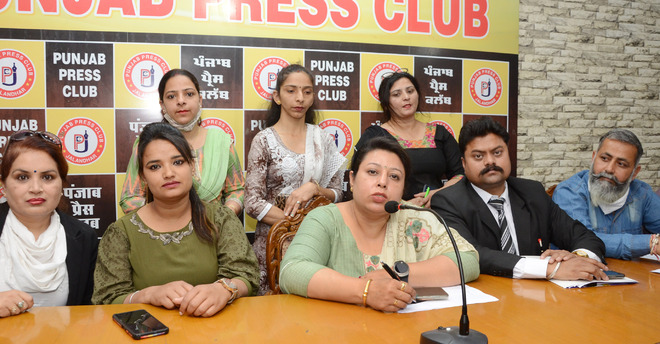 Parents hold a press conference in Jalandhar on Tuesday.

Tension has brewed over charging of additional fees under the tuition fee category between parents and managements of private schools in the district. Irate parents on Tuesday said if schools continue to overcharge, then they would have to gherao residence of the Chief Minister and the Education Minister.

Parents under the banner of “The Parents’ Association Jalandhar” alleged school managements were putting pressure on them to pay various charges in addition to the tuition fee. Upset over this malpractice, irked parents claimed that they were being harassed by school managements.

“Despite the intervention of the Deputy Commisioner, schools have resorted to various means to put mental pressure on parents. Staff of private schools has even started stalking social media profiles of parents to check their activities. Children are also being harassed by school authorities,” said Chetan Verma, a member of the association.

Though partially directing schools to adhere to the guidelines of the Supreme Court, the administration has failed to initiate any action against such institutes, said parents.

Upset over the attitude of school managements, Avni Kumar said some institutes have already refused to declare annual results of students who have not cleared their dues. Avni said they fear that students’ access to online education may also be suspended.

Rakesh Singh, whose daughter studies in Class IX at a private school said, apart from the tuition fee, school has again asked to deposit all fee components except transportation. “Even the building fee is being demanded. Everything is being adjusted in the tuition fee category,” he said.

Parents said, “Schools are not only demanding building fee, but also practical fee for the entire year. Practicals were held for just two weeks.”

They said if school managements continue to blackmail them by stating that if fee would not be paid, they would neither declare results of their wards nor promote them, then they would protest at the state-level.