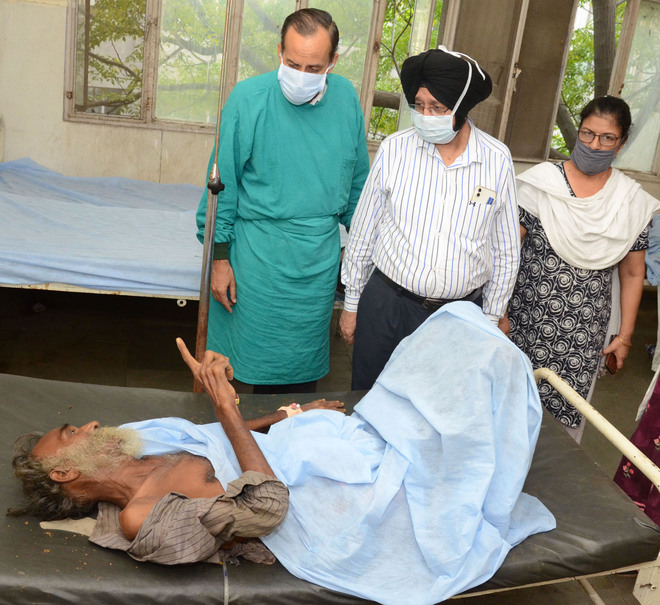 ESI Director checks on one of the patients at a Jalandhar hospital.

A day after The Tribune highlighted how two patients admitted to the ESI Hospital were found dumped here, the hospital today said one of the patients had “absconded” while the other had been “discharged on request”.

After the report was published, the ESI Director came to the hospital today to conduct an inquiry into the incident. In his preliminary report, no staff member was held accountable for the incident.

The two patients — Raja (60) and Bikram (15) — were found abandoned near the Raen Basera on September 17 night. A woman whose son was under treatment at the hospital dropped the elderly patient at the Raen Basera, while Bikram was dumped by his two “friends”. Strangely, both were ferried in the same auto.

ESI Director Gurvinder Singh said, “The elderly patient had earlier suffered a fracture in the pelvis. He has recovered, but he has bed sores. A fellow patient told him that he would drop him (Raja) at the Raen Basera since he had been receiving treatment for over a month.”

“The boy was taken by his two friends when he expressed his wish to go back to Bihar. However, since the boy could not walk, his friends left him at the spot and went away,” Gurvinder said, adding that since the elderly patient went on his own, he was recorded as “absconding”. “The boy was ‘discharged on request.’

Talking to The Tribune, Raja alleged, “I was dropped by four persons, including a ‘sweeper’ at the hospital.” The Red Cross Society has extended help to the patients.