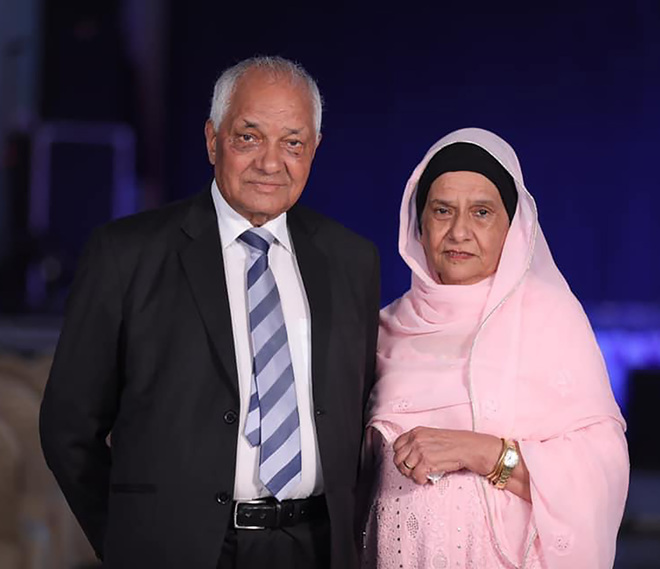 Serving the motherland: Santokh Singh Bassi with his wife.

He’s been settled in the UK for the past 64 years, but the love of his roots remains strong in him. A humanist, philanthropist and sports enthusiast, octogenarian Santokh Bassi has been a great help for his village as he has transformed the sports culture and youths of the village.

A sprawling stadium, generous help for the gurdwara, a sports academy, a 20-year-old sports tournament and extending help to every needy person knocking his door are some of the welfare works done by him.

“Meri eh soch hai apne ton chhote di madad karo taki oh vi tuhade jinna ban jave (I feel that one should help those with lesser resources so that they can rise to your level),” says Bassi.

A retailer at Birmingham in the UK, he has had a string of businesses and dabbled in retail as well as real estate in the UK. One of his prized possessions at his Birmingham home is the Queen’s personal congratulatory message to him and his wife on their diamond wedding anniversary on December 17, 2020, which is framed with the Queen’s picture. His grandson now oversees his real estate business. However, his love for his motherland remains strong.

Bassi says, “I’m very happy in the country I’m living in. The healthcare is such that I have been receiving medicines free of cost at home since the outbreak of the pandemic. But I am aware of my roots and I have a wish that my village develops and its youngsters touch new peaks of success. The 20-year-old Sardar Hakam Singh Bassi Memorial Tournament, which is named after my father, was started with this aim. It’s been 20 years and we host all kinds of sports to encourage youngsters. The football academy has also been there for the past 20 years. We wanted to raise a state-of-the-art stadium for village youngsters for practice. With the help of some good thinking citizens, we built a stadium there.”

Bassi extends his helping hand to his fellow countrymen in the UK too. He has helped many in getting jobs and been helping youngsters in the UK do work so that they can build their own homes.

Even last year, amid the Covid pandemic, he came to his village to celebrate his 80th birth anniversary. However, he returned soon after due to illness. He says when the Covid pandemic is over, he would be coming again.

Bassi has been making donations for the marriage of women, for providing medicines to needy persons during the pandemic and for educational institutions in the village. His contributions helped renovate a girls’ school. Similarly, the boys’ school at the village also received a facelift with funds contributed by him.

He also contributes for sports activities at Rurka Kalan village. Gurmangal Dass, founder of Youth Football Club, Rurka Kalan, says, “He has been a patron of sports activities. The football academy at Bandala has been a lifeline for players of the region and Bassi has been giving grants for meeting sporting needs of students.”