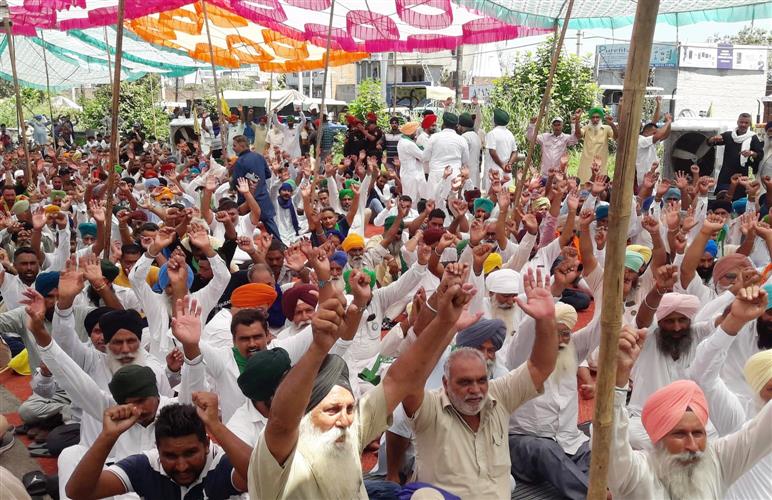 Sugarcane farmers during their indefinite sit-in at Phagwara on Saturday. Tribune photo

Following a meeting with Agriculture Minister Kuldeep Dhaliwal on Friday night, sugarcane growers protesting on the Jalandhar-Ludhiana National Highway at Phagwara today partially lifted the blockade from one side of the highway. The move came after the minister promised them that the government will deposit Rs 24 crore into their accounts by August 16.

He also promised farmers that the auction of the property of the sugar mill at Fatehabad, Haryana, which is under the Punjab Government, would be held as planned and the proceeds of Rs 24 crore received from it on August 16 would be given to farmers.

Davinder Singh Sandhu, vice-president, Bhartiya Kisan Union, said: “The Punjab Government had previously stalled the auction of the mill’s property due to which farmers were unable to receive the proceeds. The suspension of the auction has now been lifted and we would get the proceeds on August 16.

“The dharna will continue as planned. Eminent leaders of the Samyukt Kisan Morcha (SKM) will visit dharna site daily. Our plans to hold the huge gathering on August 25 will also stay put as before. The decision to lift the dharna from one side of the road was not taken due to the meeting with the minister. We still await our dues worth Rs 72 crore. It has been done to avoid trouble for commuters” BKU (Rajewal) president Balbir Singh Rajewal also visited the site at Phagwara today. The line of tractors which were parked on both sides of the highway yesterday, is now gone. As many 31 farmers unions of the SKM had yesterday declared a huge protest on August 25 at Phagwara.

The SKM also announced that 10,000 farmers from across the state would be heading out in a jatha to Lakhimpur Kheri to demand action against the mowing down of farmers.