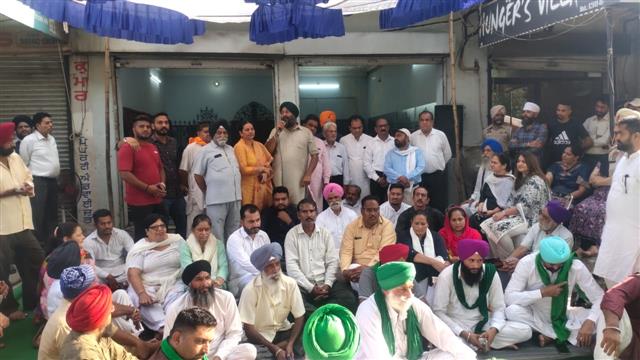 Protesters stage a dharna in Phagwara on Tuesday. Tribune photo

Hundreds of residents, under the banner of Sarab Sanjha Front, continued their dharna on the Phagwara — Nakodar road today.

They have been protesting against government inaction over construction of the dilapidated Phagwara-Nakodar road. The dharna saw the participation of prominent figures like AAP Leader Santosh Kumar Gogi, ex-Mayor Arun Khosla, Anita Som Parkash, among others.

The leaders stated that with the efforts of the Centre, an amount of Rs 16 crore has been sanctioned for the first year of construction of this road. However, the project was suspended in between, due to which many have been facing difficulties. They complained that there are big potholes on the road, and mishaps occur on a daily basis.

It is being said that residents of Phagwara and Hadiabad could face much more problems ahead of the Ashtami Mela in Mansa Devi Nagar. Dr Nayan, Municipal Corporation Commissioner, Phagwara, and DSP Jaspreet Singh reached the spot of the protests, the protesters could not be placated.