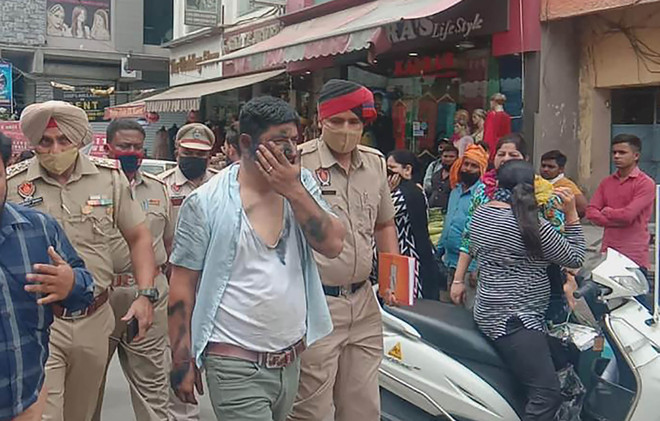 The teacher being taken to the police station in Phagwara.

A teacher of a private school in Phagwara was arrested by the police on Thursday after a complaint of making obscene gestures was filed against him by a girl student.

The teacher who is a native of Himachal Pradesh was thrashed by parents and the irked family members sprayed black colour on his face. The parents alleged that the teacher used to show obscene films and make gestures to their daughter in the garb of teaching her at school.

When the girl informed her parents regarding the same, family members of students gathered at the school and beat up the teacher..

The police have also questioned the school management as how come the institute was open during the pandemic.

SHO Navdeep Singh reached the spot and said, “The complaint has been filed on the basis of a statement of the girl who is a teenager. We are also looking into why the school was open amid the pandemic. While no material has been found from mobile phone of the teacher, investigation is on. The school management will be questioned tomorrow.” An FIR has been registered under Section 354 of the IPC against the teacher.