Trucks, tractor-trailers can use city roads between from 11 am to 1 pm only 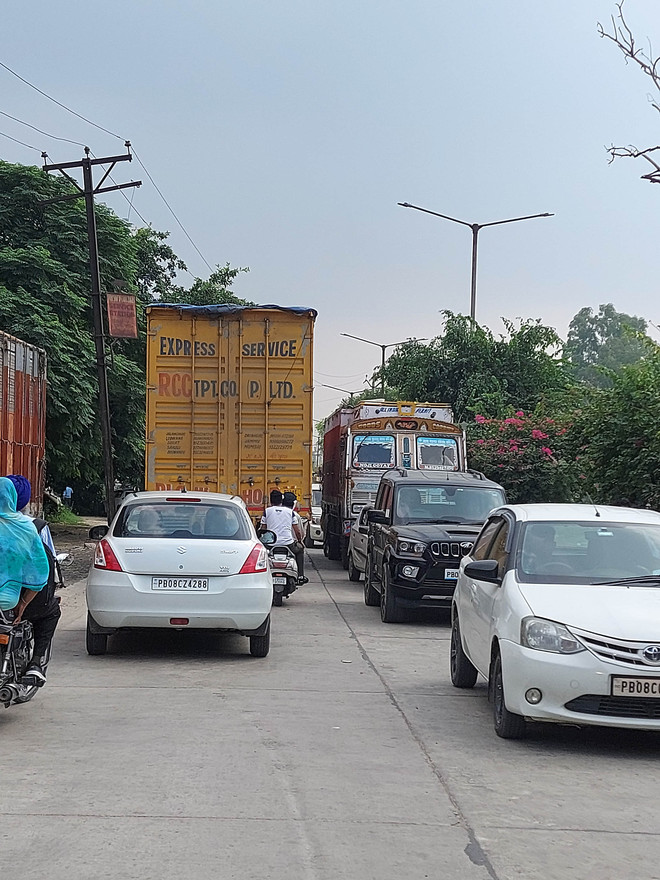 Heavy vehicles moving on the city roads . A Tribune Photograph.

It’s been over a month since Tejinder Kaur, a 27-year-old woman lost her life in a road accident near the Maqsudan-DAV College road. She was reportedly crushed-to-death under the wheels of a speeding truck.

While, her family, which resides at Lidhran village, and her husband, who is settled abroad, have still not come out of the trauma, no lesson has been learnt by the authorities concerned. The movement of heavy vehicles goes unabated on the route. Flouting the 8 am to 8 pm rule, trucks and other heavy vehicles can be easily spotted on the road during the daytime.

The truck driver, who hit the woman, was drunk at the time of the accident. Besides, he was driving heavy vehicle on the road during unscheduled hours as the accident took place around 10.30 am. The deceased was heading to her salon in Model Town on her Activa scooter.

While mentioning the traffic guidelines, the SHO, police division No. 1, Inspector Ashwinder Singh Siddhu, said, “Heavy vehicles have been given relaxation to ply on city roads from 11 am to 1 pm. The rule is being flouted as vehicles use the road throughout the day.”

Jimmy Singh, a resident of Seth Hukum Chand Colony said, “Heavy trucks and tractor-trailers obstruct the movement of traffic in the city. It’s difficult to drive when heavily-loaded trucks are on the road.”

Apart from accidents, commuters also stressed upon the damage overloaded trucks and trailers are causing to roads.

Despite the presence of traffic police, drivers manage to ply trucks on roads. After the accident, the police halted movement of trucks and tractor-trailers from Maqsudan Chowk to Workshop Chowk. But, after a few days heavy vehicles once again started plying on the road. In the past also, heavy vehicles have claimed many lives on the route.

Trucks coming from different cities and states usually move towards their destinations through the Maqsudan-DAV stretch only. Vehicles supplying vegetables and fruits to the city also use the same route.