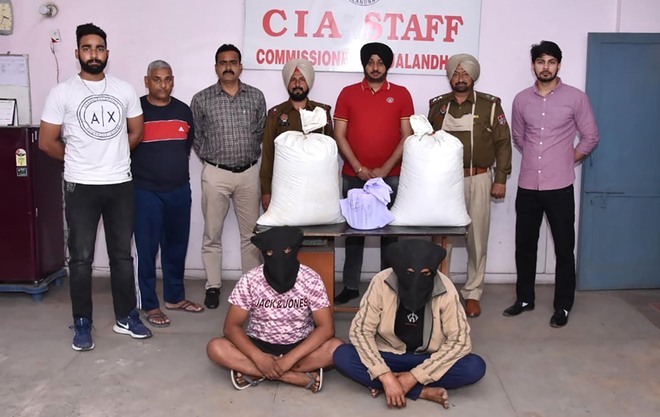 The arrested gang members in the custody of the Jalandhar police.

The Jalandhar Police Commissionerate on Friday arrested two persons (an inter-state gang of peddlers) and recovered 4 kg of opium and 50 kg of poppy husk from their possession. Jalandhar Commissioner of Police Gurpreet Singh Bhullar said the CIA Staff-I intercepted a truck (HR-68-A-5148) near Paragpur police post.

Bhullar said truck driver, Malkiat Khan, and his accomplice Ranjit Singh, alias Jeeti, told cops that they were transporting plastic granules, which were to be delivered in Baddi and Patiala.

He said the accused revealed that they were into this trade from the last three years and this consignment was to be handed over to some person on the national highway. He said the duo used to bring contraband from Chittorgarh (Rajasthan) and supply it in the state. He said a case has been registered under Sections 15, 18/61/85 of the NDPS Act against the accused.