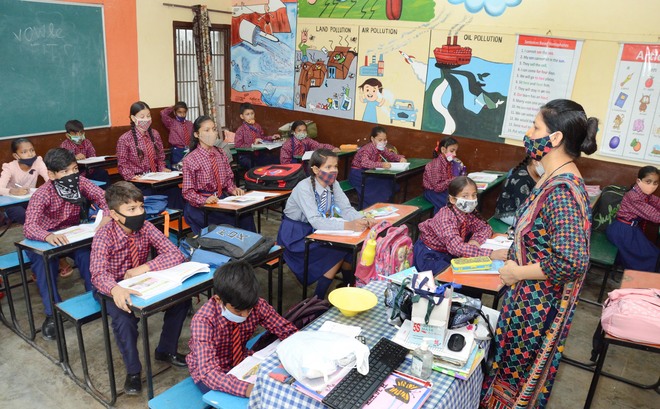 Students attend a class at a government primary school in Jalandhar on Monday. Tribune Photo

As the state government allowed to call students for regular classes from Monday, the government schools and some private instiutes in the district welcomed students with open hearts today.

It was after four-and-a-half months that schools opened up for students. While senior classes got a better response, similar attendance was missing in primary classes. Only 15 per cent to 20 per cent students from primary classes attended schools today.

At Government Primary School, Ladowali Road, only 50 out of 300 students reached the campus. Same trend was witnessed in other primary schools of the city.

Students of Classes IV and V outnumbered those in Classes I to III. Schools even started serving midday meals to students from today.

While attendance of students of Classes X to XII has picked up significantly, students from Classes VI to IX also came to schools for the first time today.

DEO (Secondary) Harinder Pal Singh said, “The overall attendance in the district of all secondary and senior secondary classes was 52 per cent today. Some schools in rural areas witnessed 65 per cent attendance as kids certainly prefer offline classes more. In cities, the attendance was relatively less.”

Many private schools in the city today opened up for all classes. All 33 branches of St Soldier Group of Institutions resumed classes today. Students were welcomed with flowers by staff members of schools. The happiness of getting back to school was clearly visible on faces of students. Chairman Anil Chopra and vice chairperson Sangeeta Chopra said adequate arrangements were made for safety of students. “Seating arrangements have been made as per SOPs of the Health Department. All classrooms will be sanitised daily. Its mandatory for students and staff to wear masks. Students are called to school after consent of parents,” said Anil.

Even some playway schools opened in the city. Owner of Cynosure Prep School said, “We called kids and their parents to give consent. We explained them how we will run our classes by following safety measures. Half students will come on Monday, Wednesday and Friday. Remaining kids will come on other three working days. Many parents working parents gave their consent. We told parents that online classes will continue alongwith offline as we cannot make it compulsory for little kids to attend regular classes.”