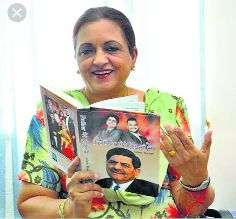 When Prof Sarita Tiwari came back to college in the morning after having featured in a play on Doordarshan Jalandhar, she would find the name of her character, played previous night, written on the blackboard by her students.

Having given over two decades of her life to the channel, Sarita has been etched into the minds of the city’s populace. Her various characters have taken off from the blackboard and remain printed in people’s memories, and that delightful voice on the radio – all through 80s and 90s — has made the pleasant visage of hers hard to forget. A loved professor and a TV actor, she has featured in 350 plays spread across DD Jalandhar, Shimla, Delhi, Patiala, Chandigarh and DD Kashir (the name for Doordarshan Kashmir). She taught English but did plays in Punjabi and Hindi.

Patience is a virtue

While most people start acting early on, she had to wait until her first son was born. Hailing from Mandi Ahmedgarh in Sangrur, she could not get approval to pursue acting as a profession due to reservations at her conservative household. “Apne ghar jaa ke jo marzi Karin” (do whatever you want when you get married,” his grandfather would say. She spent her childhood with her grandparents after her father – an army officer – was posted to Siliguri (among other places).

“My music aspirations also couldn’t be realised because my family didn’t deem music a respectable subject. Even my home science (music and English) classes in BA first year were referred as ‘dal banaun di BA kardi hai’ (BA in cooking dal) by relatives,” she adds.

However, the stars were already aligned. In her second year, she changed her subject to BA English (Hons), eventually pursuing MA in the same. Soon, Sarita began teaching and tied the knot in 1980. She was blessed with a son in 1982. The very next year she was blessed by the heavens again — this time with a breakthrough in her dreams and career. It was in 1983 while teaching at Khalsa College Garhdiwala her first outing to DD Jalandhar happened. Thanks to the steadfast support of her husband and eminent educationist Dr VK Tiwari.

“My husband backed me all throughout. He gave me the freedom to realise my aspirations,” she says. It was his friend Zahid Mansoor who had asked her to read a dialogue from a soliloquy of Razia Sultan. “And when I did, he led me to DD’s then director Bashir Ahmed Batt. Both being Kashmiris, they mumbled something in Kashmiri and the next thing I knew was that I had been cast in the telefilm ‘Lakeerein’,” the professor reminisces.

Playing a Dalit widow, who sacrifices much for her daughter’s education, the 1.5 hour running film based on a theme of communal harmony became an instant hit. From there on, she would star in the first DD Kisan play ‘Adhaar Shila’ among many others like ‘Pratishodh’, ‘Apna Apna Dayra’, ‘Adh Khere’ based on struggle of freedom fighters.

Staying active across 25 years, she soon made the transition to radio and was also favoured to anchor events for myriad of departments and private ones in Jalandhar for her enticing articulate voice. Apart from TV and radio laurels, the professor, after retiring in 2015, penned two books on her husband titled ‘Father Mere Puttran De’ (2017) and a short story book ‘Aap Hamare Dil Mein Baste Hain’ after his demise in 2016. In 2018, she became the lone woman to be awarded with a citation for her achievements in education and social work at the Lyallpur Khalsa College.

Speaking on how life’s been during the pandemic, Sarita says, “It has been extremely serene. I’ve been watching and reading spiritual things and have had the rare honour of enjoying the views of the snowclad mountains from Jalandhar”.

“I’m trying to make the most of my time. I would also like to pen another book on my husband,” said Sarita Tiwari.