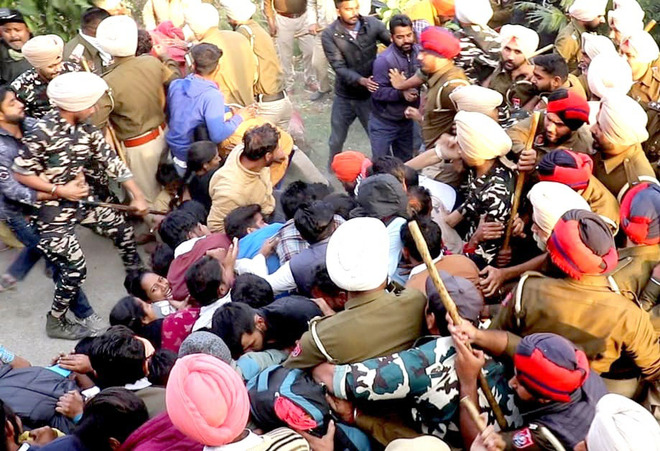 After they got no formal assurance about their recruitment, the TET-B.Ed Pass Teachers’ Union once again tried to gherao the residence of Education Minister Pargat Singh at Mithapur this afternoon.

As the union members reached his place, barricades were laid across all roads which they tried to jump. This led to a prolonged scuffle between the youth and the police. The unionists even tried to snatch the lathis of cops.

Though the police did not resort to any lathicharge owing to clear instructions from their political bosses in view of the approaching elections, the union activists said the cops wielded lathis on their legs and abdomen during the melee. Owing to this, three girls – Kulwinder Kaur, Sunita Rani and Veena Rani, all from Fazilka – reportedly got injured and had to be hospitalised, said union leader Amandeep Sekha.

The teachers who started the protest after 2 pm as announced by them continued it till late evening. “We will not go back till we get an assurance from the minister. We tried to break the barricades thrice today but remained unsuccessful owing to heavy deployment. We kept insisting on getting a word from the minister but a DSP put us to his assistant once again who told us that the minister tried to catch up with the CM thrice today on our issue but to no avail”, he said.

Amandeep said, “The time is lapsing and poll code could be imposed anytime after three weeks. We are asking for 9,000 recruitments. We do not want any excuses at the end. We have faced enough already. We are also upset over the fact that the CM has all the time to go to Punjabi University but has no time to spare for us. Our youth are sitting atop overhead water tank for the past 95 days but the politicians are not bothered.”

Nearly 250 teachers from 10 Meritorious Schools of the state also lodged a protest outside the minister’s residence. They wore black gowns and demanded regularisation of their jobs. “We went through the toughest selection procedure to be recruited in 2014. We demanded that we be regularised. The government agreed adding a rider that we would face salary deduction while switching over from contractual jobs to regular jobs. We agreed but the government picked only a handful of teachers, leaving the rest of us to continue with our fight on the roads,” said Kulwinder Singh Bath, state president, Meritorious School Teachers’ Union.