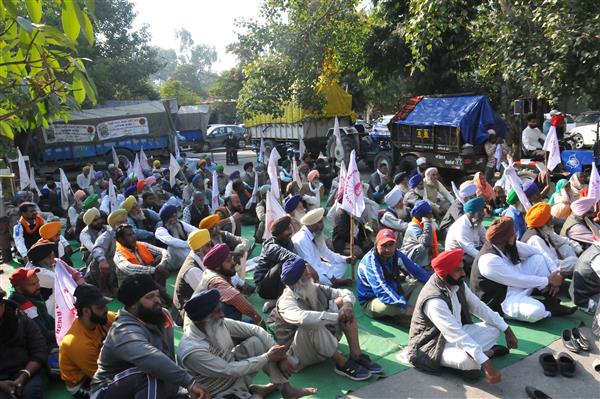 Protesting farmers inside the District Administrative Complex in Jalandhar on Tuesday. Malkiat Singh

The Kisan Mazdoor Sangharsh Samiti, Punjab, under the leadership of its district president Paramjit Singh Bhulla and district general secretary Kuldeep Singh Begowal, staged a dharna in front of the Deputy Commissioner’s office for the fourth day. During this, effigies of the state government and central government were also burnt.

Farmer leaders demanded that justice be given to the farmers who died in Lakhimpur Kheri and that Union Minister Ajay Mishra should be dismissed from the Cabinet and a case should be registered against him and he be arrested. They also demanded that all loans of farmers and labourers should be waived, crop guarantee law should be made and the price of crops should be increased in accordance with the Swaminathan Commission report.

They sought that the false charges registered against the farmers and labourers of Punjab during the farmer struggle should be dropped. They warned that if the demands were not met then the struggle will be intensified.