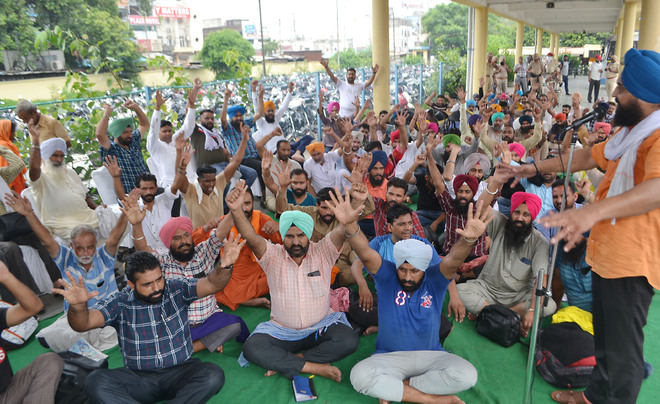 Members of the Contractual and Outsourced Workers Union of Punbus and PRTC protest in Jalandhar on Tuesday. Tribune Photo: Sarabjit Singh

Following the call given by the Punbus Contractual Workers’ Union, the city bus stand remained closed for four hours from 11am to 3pm here on Tuesday. The movement of buses and passengers was affected till the time the protest continued.

As part of the two-day protest and an unofficial holiday from August 3-4, this was the first day of the protest by the contractual workers demanding regularisation. The bus stand will again be closed for four hours tomorrow.

Addressing a gathering here, Chairman Jasbir Singh said neither any passenger nor any bus was allowed to move inside the bus stand. The strike was observed against the non-fulfilment of the demands of the workers.

Apart from that, the union members also announced to hold a three-day state level strike from August 9 and 11 and gheraoed the residences of CM Amarinder Singh and Punjab Pradesh Congress Committe Chief Navjot Singh Siddhu. Their demands include a fleet of at least 10,000 buses considering free travel for women and the population of the state, the contractual employees of PUNBUS and PRTC should be regularised in their respective departments, implementation of the Supreme Court’s equal pay for equal work, repeal the condition of the report and reinstate the employees.

Jasbir Singh, district general secretary of the Thekha Mulazim Union, said, “We have been seeking regularisation of jobs for the past several years but to no avail. The government seems to have turned its blind eye towards us. The strikes and protest would continue to be intensified unless our demands were met, added Jasbir.