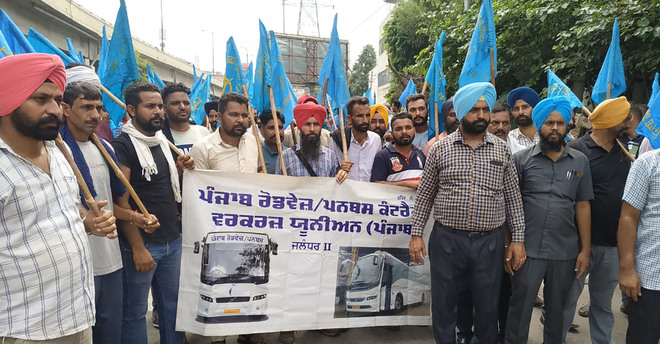 Contractual and outsourced workers under the banner of the Punbus and PRTC Theka Mulazim Union hold a protest march in Jalandhar.

On the third day of their strike, contractual and outsourced workers under the banner of the Punbus and PRTC Theka Mulazim Union, held a rally in the city on Wednesday.

As per estimates, Jalandhar-I depot and Jalandhar-II depot, which has a fleet of over 200 buses, have been suffering a financial loss of nine lakh (each) daily. The protesters remained adamant as the state government refused to accept their demands.

The most affected include women passengers, who had been been commuting for free in the state-owned buses for the last six months as they now need to travel on private buses.

Gurpreet Singh, who is a contractual worker, said, “Subsequent meetings with the department concerned have proved futile. Instead, the government has issued notice to remove us. We will intensify our protest and block highways.”

Members of the union announced to hold chakka jam on Monday morning. Both Punbus and PRTC buses remained off road throughout the day today. The protesters said buses would not be allowed to move as long as their pending demands were not accepted.

Vikramjit Singh, a contractual staff worker, said it’s been months since we began protesting and sought regularisation. “Most drivers, conductors and workers, include contractual workers who are not paid decent salaries. Hence, we will not end protest unless our demands are met,” he said.

The key demands of the contractual workers include immediate regularisation, and a fleet of at least 10,000 buses.