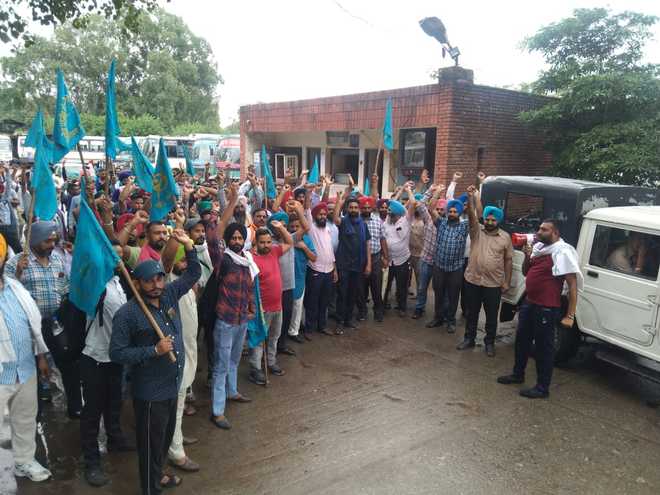 Members of the Punbus and PRTC Contractual Workers’ Union protest outside the residence of Jalandhar Cantt MLA Pargat Singh on Sunday. Later, they submitted a memorandum to the MLA.

The protest by Punbus and PRTC contractual workers’ union entered its seventh day here on Sunday. After organising a protest march, the agitators protested outside the residence of Jalandhar Cantt MLA Pargat Singh and submitted a memorandum to the MLA.

The Punjab Roadways and PRTC workers have been holding the protest since last Monday, demanding the regularisation of the services of all the outsourced and contractual workers. The government-run and PRTC buses, including Volvo, have been staying off the roads. As a result, the Transport Department is suffering losses worth over Rs10 lakh daily in the district. Sources in the roadways department said owing to the apathetic attitude of the government, the roadways was suffering losses in the district.

“As per the law, the services of a contractual worker have to be made permanent within 240 days of his/her joining the duty. However, I have not been regularised even after four years of my services,” said Gurpreet Singh, a contractual worker. The workers under the banner of the contractual workers’ union said they had been working on meagre salaries, but the government was not taking any action in their favour.

The main demands raised by the workers include implementation of the Supreme Court’s guidelines of equal wages for equal work, addition to the fleet of 10,000 buses, the Punjab and Haryana High Court’s orders regarding the cancellation of driving permit of private buses and regularisation of contractual workers, cover workers under the Punjab Pension Scheme, loan waiver of Punbus and DA to be given to all drivers and conductors.

The protesters said they would again take out a protest march in the city tomorrow and threatened to block national highways on September 15 if the government failed to accept their demands in the meeting, which would be held on September 14.