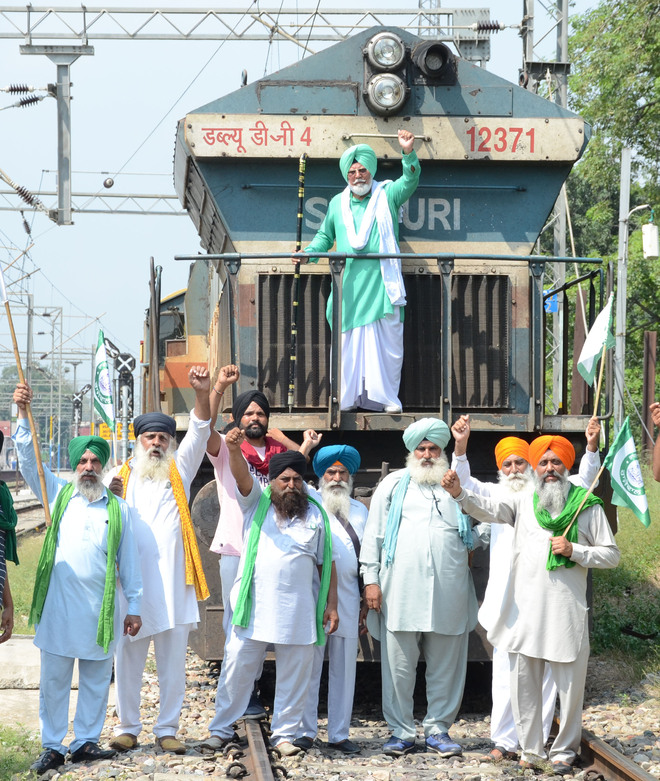 Farmers raise slogans while blocking a train on the Jalandhar-Delhi railway track in Jalandhar on Monday. Tribune Photo: Sarabjit Singh

Considering the bandh, the Indian Railways had cancelled, short-terminated and diverted around 50 trains, including, New Delhi-Amritsar Sachkhand Express, Delhi-Pathankot Express, Chandigarh-Amritsar Intercity and Nangal Dam-Amritsar special train. While the railways had made apt arrangements for stranded passengers, those who had to reach their destinations early looked for alternatives.

Karanvir Singh (32), an Ambala-based man, who had to attend an important event in Amritsar, said, while there were no buses and trains, he approached taxi operators, who in return demanded Rs3,500-3,800 for dropping him through diverted routes.

Similarly, migrants sitting outside railway station said, they were not aware about the bandh. After finding their scheduled trains cancelled, they had to rebook their tickets for other trains.

Divisional Railway Manager Seema Sharma said some passenger trains were cancelled while some other services had been rescheduled. DRM said the railway authorities tried to halt the trains at proper railway stations so that the stranded passengers could get some facilities. Station Superintendent Phagwara Devinder Singh said the Amritsar-bound Howrah Mail coming from Kolkata was stopped at 6.35 am, while Jammu-bound Begampura Express had to be halted at Phagwara at 6.46 am. He said though the Begampura Express had no scheduled halt at Phagwara, it had to be stopped due to track blockade near Jalandhar.