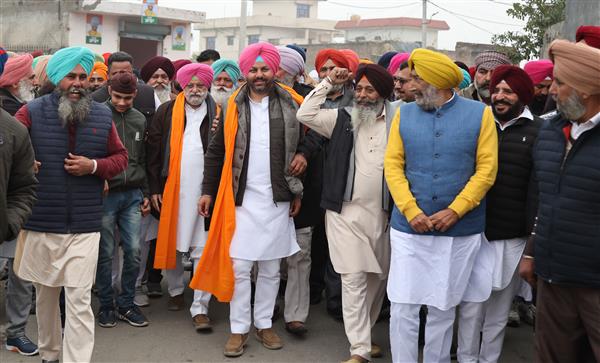 Two days after three MLAs and an ex-MLA demanded expulsion of minister Rana Gurjeet Singh from the Congress, he took on Sultanpur Lodhi MLA Navtej Cheema holding a rally in his native Bussewal village and addressing it in favour of his son Rana Inder Partap Singh.

Rana’s son has announced to contest from Sultanpur Lodhi as Independent candidate against party candidate Cheema, over which the latter has been lodging complaint with the party against Rana for creating indiscipline. Rana did not just dare to hold a rally against Cheema but even challenged him in his hometown.

“I will quit politics if my son loses the battle”, he announced. He even said that Cheema would have surely become jittery after seeing the strength and the response of the rally in his own village. Cheema, however, has alleged that Rana had brought in 40 cars from his own Kapurthala constituency and showed them as voters of Sultanpur Lodhi.

The war of words that has ensued between the two has made the atmosphere in Sultanpur constituency very tense. Rana has been claiming that he is not committing any indiscipline. “I am just supporting my son. When he will win, we will add this seat in the Congress kitty,” he is telling at all rallies. Meanwhile, Cheema fumes: “When I have got the Congress ticket, how and why should the minister from the same party support an Independent candidate against me. This is gross indiscipline and I hope that the party high command will act soon.”

Rana, on the other hand, has said: “If party president Sonia Gandhi will ask me to withdraw from supporting my son, I will follow her direction. For me, party is still supreme. I have only been supporting my son as the people of Sultanpur Lodhi have been feeling much suppressed under Cheema owing to the registration of false cases.”

Cheema has termed Rana’s claims as false and been alleging that he is playing in the hands of the rival parties, including the SAD, BJP and the Punjab Lok Congress.