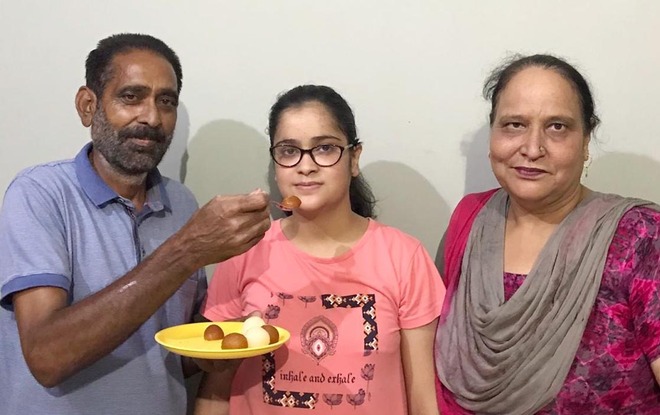 Ravneet Kaur celebrates her success with parents in Kapurthala on Wednesday. Tribune Photo

Ravneet Kaur of Lord Mahavir Jain Public School, Phagwara, and Ansh Kalra of DAV Public School, Kapurthala, were on cloud nine as they topped the district with 98.4 per cent marks in the CBSE Class X examinations, the results of which were declared on Wednesday. Their aggregate total was 495 out of 500.

Besides being an avid orator, Ravneet has won several declamation and debate competitions. She scored a perfect 100 in social science, 98 in English, 96 in science, 99 in computers and 95 in Punjabi. Besides, she scored 95 marks in maths that she considered as the most difficult subject for her.

Sharing her success mantra, Ravneet said, “I never followed a particular time-table for my studies, but kept myself focused on self study and through revision. Regularity in classes and understanding all the NCERT topics helped me a lot in my preparations for the subjects. Another thing I focused on was obeying my teachers and listening to whatever being taught in the class.”

Ravneet, whose father works in a government health department, aspires to become a doctor. Seeing her excellent marks in the exams, she has decided to join the medical stream.

Similarly, Harshit Tara, a student of MGN, Kapurthala, scored 97.4 per cent marks to bag the second position. “I dedicated three to four hours to study each day. Consistency and regularity in the studies is what matters most to score good marks. Besides, I spent hours on my studies and it helped in covering the vast syllabus.

I would suggest my juniors to remain consistent and do hard work if they want to score good marks in exams,” said Harshit, who credited his success to his parents and teachers. Aiming to become a drug inspector, Harshit, whose father is a pharmacist, has opted for the medical stream in the next class.

Following Ravneet and Harshit, Gautam Anand, a student of Lord Mahavir Jain Public School, bagged the third spot in the district with 97.4 per cent marks. Harleen Kaur, a student of Kamla Nehru School, Phagwara, secured the fourth position with 97.2 per cent marks, followed by Harnoor Kaur of Cambridge International School Phagwara with 97% marks.