Dip in oxygen level, cases without co-morbidities a cause for concern 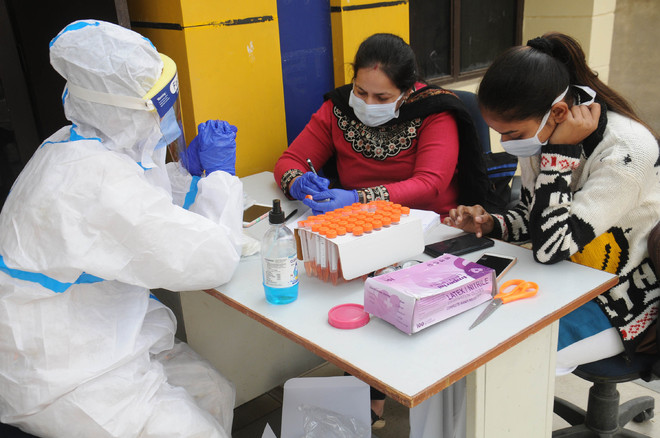 With the city Covid numbers rising to 17,310 on Wednesday, and the second wave expected in a matter of days, expert warn citizens of a second wave, which might be mutated or more severe than the previous.

So far, there have been 541 deaths in the district and the deceased include a sizeable number of young people.

While the number of Covid patients has rapidly risen in the past few weeks, there is a dramatic rise in the number of deaths as well. However, one of the most bothersome aspects is the severity of symptoms and the death of people with no co-morbidities. The recent deaths of the CDPO’s office staff among others are the case in point.

While one of the two assistants who died had only a 43 per cent oxygen saturation levels while being treated at the hospital, his family said he had mild sickness for months.

Months after attending his office and weeks after he recuperated from cough, the 50-year-old patient, who finally got his Covid test done, died within 24 hours of getting tested.

Mandeep Singh, the deceased’s relative, said: “He was 50-year-old and very active all through the lockdown. Subsequently, he had cough some time ago and saw a local doctor, after which he was diagnosed with typhoid. But when the symptoms died down, he kept going to office again. When I met him a few days ago, I could tell something was wrong with his health. While he kept attending office, disregarding his symptoms and considering these mild, eventually when he was taken to the hospital, he was diagnosed with third-stage pneumonia. He reported of shortness of breath and died within a day of being hospitalised.”

District nodal officer for Covid Dr TP Singh said: “While a majority of the cases are still asymptomatic, it is certain that the oxygen carrying capacity seems to be getting affected in the new wave. A sudden dip in oxygen saturation level of many serious cases is being witnessed. So much so that ventilator support is sometimes unable to aid recuperation of stabilisation. While the number of asymptomatic cases is as much as before, the new trend in symptomatic cases is certainly worrisome. It is for Similarly, Amreek Singh, district vice-president, BKU, Kadian, said: “On Wednesday, all farm outfits met in Ludhiana and spent the night at Fatehgarh Sahib gurdwara, where local farmers had made arrangements for lodging and langar sewa. Afterwards, as per the scheduled date, farmers will move towards Delhi on Thursday. Farmers from Haryana will also join in. The counterparts in Haryana will help us with milk and other supplies.”

The leaders of other farm unions said farmers would cross the state in a phased manner. Around 400-500 trolleys with a capacity of 20 farmers left Phagwara and Phillaur on Wednesday, Amreek said.

The Delhi Police said legal action would be taken against farmers if they enter Delhi amid Covid-19 spread. Farmers also expressed their apprehension against the same.

Jalandhar: With 145 new cases surfacing in Jalandhar on Wednesday, the Covid tally reached the 17,310 mark. Three deaths were also reported, taking the toll to 541. Notably, while there were 17,071 cases in the district on Monday, the past three days alone have seen the district piling up 239 new cases. As many as 15,696 people have been discharged so far. There are 1,073 active cases in district. As many as 696 people are also under home isolation in Jalandhar. Meanwhile in Kapurthala, six people were tested positive for Covid-19. With the cases peaking yet again, the district administration has busied itself with preparations in the anticipation of a second wave. Following testing of staff members at the Gandhi Vanita Ashram after the demise of two CDPO staff assistants due to Covid, the inmates were also tested on Tuesday. While CWC members had raised concerns over the testing of ashram and shelter home inmates putting up at the Children Home for Girls, Children Home and Observation Home as well as Widows’ Home, DC Ghanshyam Thori had assured their testing. Over 193 inmates of these homes were tested for Covid-19 on Tuesday morning. TNS

Jalandhar: DC Ghanshyam Thori on Wednesday exhorted three major private hospitals of the city to increase the bed capacity in their institutions for the level-II and level-III Covid patients at least by 50 per cent. To review the preparedness by the health institutions to deal with the fresh surge of infections, the Deputy Commissioner visited Capitol Hospital, Shrimann Hospital and NHS Hospital and took the stock of the arrangements. Thori said as per experts, the second wave of contagion would be more intense and that the district administration was duty-bound to ensure the availability of an adequate number of beds with ICU facilities and oxygen support to save each and every life. He said Jalandhar had 575 level-II and 253 level-III beds in 51 private hospitals out of which 467 level-II and 192 level-III beds were still available in these institutions. The Deputy Commissioner said there was a need to increase the bed capacity to deal with the second wave by ensuring quality treatment to patients and reducing mortality. Dr Sandeep Goel from the NHS Hospital said, “We have now 16 level-III beds in the hospital.” He said, “We can scale up the capacity to 70 beds if the second wave of Covid hits in the coming days.” Dr Harnoor Singh Pruthi from Capitol Hospital and Dr VP Sharma from Shrimann Hospital said they would cooperate with the administration to double the level-II and level-III beds capacity in their hospitals. Deputy Medical Commissioner Dr Jyoti Sharma said the administration was constantly in touch with all private hospitals on the Covid-19 board and would tackle the fresh spike of infections effectively. TNS