Absence of cops in markets is leading to worsening of situation 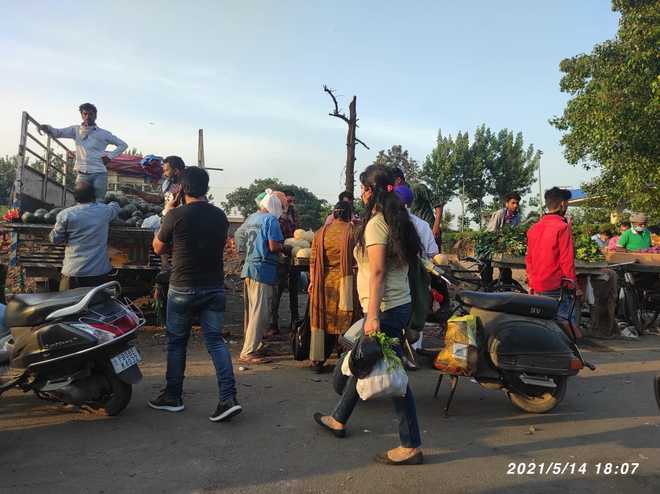 A number of people can be seen at the focal point area of Jalandhar.

Despite the fact that the administration has imposed the weekend lockdown in the district from Friday 5 pm to Monday 5 am, residents are openly flouting the norms with impunity.

At several places, local residents can be seen standing together in large numbers giving two hoots to the social distancing norms. The absence of policemen to take control of the situation leads to the worsening of the situation. While there is no let-up in the rising number of cases and fatalities, the careless attitude of offenders is only adding to the tally of active cases.

Disappointed by the lack of concern among violators coupled with the administration’s apathy, some responsible residents do not hesitate to share pictures and videos of the violations on social media groups.

Referring to a rush of street vendors on the Focal Point road and Pathankot Chowk, Rajan Sharda enquired as to why there was not any check on the violations in the area when it was contributing largely to the Covid tally.

“The market is frequented by vegetable and fruit vendors even during the curfew hours. Local residents can be seen roaming about on roads and streets could also be seen surrounding vendors cart. Apart from vegetable vendors, carts of street food and clothes can be seen surrounded by residents,” added Sharda, who is also president of NGO Bhartiya Sarwahit Parishad.

The vendors selling vegetables claimed that they didn’t know the exact timing of curfew hours. Surviving on hand to mouth job, the vendors sought permission from the administration to operate in residential colonies. A chaotic situation could be witnessed on the road adjoining the Focal Point area. The vehicular rush from the Focal Point-Pathankot bypass chowk also makes the road crowded.

Keemti Saini, a resident, says being away from the city, Covid safety protocols mostly goes unabated in areas, including Kali Mata Mandir, Sodal Road, Gujja Pir Road, Doaba Chowk and the Focal Point sabzi mandi. “While the threat of infection looms large and any complacency can prove to be fatal. Hundreds of people are testing positive every day and succumbing to the virus on a daily basis, hence a strict vigil is needed to prevent people from venturing out.

Meanwhile, Ravinder Kumar, SHO, police division No.8, stated that the police were keeping an eye on violators through nakas and patrolling vans. He assured them of taking action against rule breakers in his area and appealed to the residents not to step out during the curfew hours.