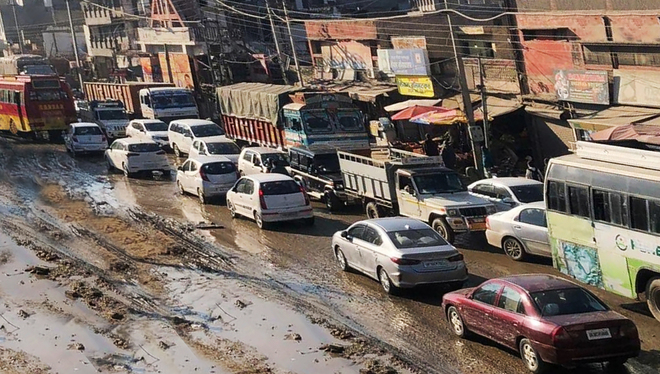 Muddy stretch in Adampur where flyover is being constructed for the Jalandhar-Hoshiarpur four-laning project. Tribune Photo

Residents of Adampur are perturbed over the lackadaisical attitude of PWD officials in handling the construction work of the flyover for the ongoing Jalandhar-Hoshiarpur four-laning project.

They rue that their lives have been badly affected ever since work on the flyover started here. They say work has been moving at a snail’s pace for the past four years. Even as there are clear-cut guidelines on providing service lanes along the construction site for the smooth movement of traffic, residents say that no such lanes have been provided here.

“All we have been provided with in the name of service lanes are muddy roads where our vehicles stuck. Phone lines of BSNL have been lying disconnected for the past few days because of the construction work. Around 55 per cent of the residents are not able to use their mobile phones. Further, trenches have been dug up for laying sewer pipes along the roads which is further causing inconvenience and making driving a risky affair,” said Harinder Singh, Adampur resident.

Preeti, another resident, rues, “We are not able to do shopping in the main bazaar along the road for a long time as there is no provision of parking space available now. The roads are slippery and filled with pits all over.”

Monty Sehgal, who owns a petrol pump along the highway, alleged, “The construction of the highway is being done in complete violation of the NHAI norms. It is mandatory for the civic authorities to provide a proper alternate passage to commuters for their smooth transit even when construction work is on. But they have not provided any service lanes as a result of which a chaos prevails here daily.”

Deputy Commissioner Ghanshyam Thori said he had pulled up officials of the PWD for their negligence and had asked them to expedite the construction work.