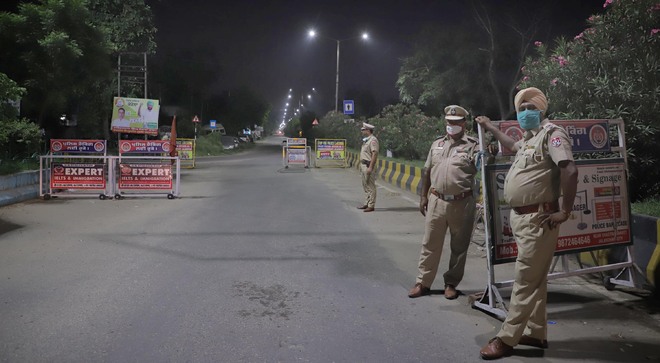 Curfew will be imposed from 11 pm to 5 am in the district.

After a relief of nearly six months, the administration on Saturday reimposed the curfew in Jalandhar district till further orders due to the sudden spike in the Covid-19 positive cases.

“The curfew will be imposed between 11 pm and 5 am from Saturday night onwards and residents will be strictly prohibited from coming out on roads during the curfew hours,” stated an order issued by the district administration.

Certain exemptions have been made in the curfew order. Factories operating in 24-hour shifts, medical emergency cases, traffic movement on the national highway and people returning after travelling by buses, trains and airplanes to reach their destinations, have been exempted from the night curfew in the district.

The development was reportedly introduced after Chief Secretary Vini Mahajan chaired a high-level meeting with the Deputy Commissioners of all the districts of the state. The meeting was held to review the Covid situation in the state.

Subsequently, considering the surge in cases and apparent second wave of the virus in the state, DC Ghanshyam Thori exercising his rights under Section 144 of the CrPC and National Disaster Management Act, 2005, on Saturday ordered night curfew between 11 pm and 5 am.

Factories operating in 24 hour shifts, medical emergency cases, traffic on national highways and people returning after travelling by buses, trains and planes to reach their destination, have been exempted from the night curfew.

Hoshiarpur District Magistrate Dr Shena Aggarwal exercising the powers given under Section 144 of the CrPC and the National Disaster Management Act has also imposed the night curfew from 11 pm to 5 am till further orders. She said emergency medical services and goods carrying vehicles will be exempted.