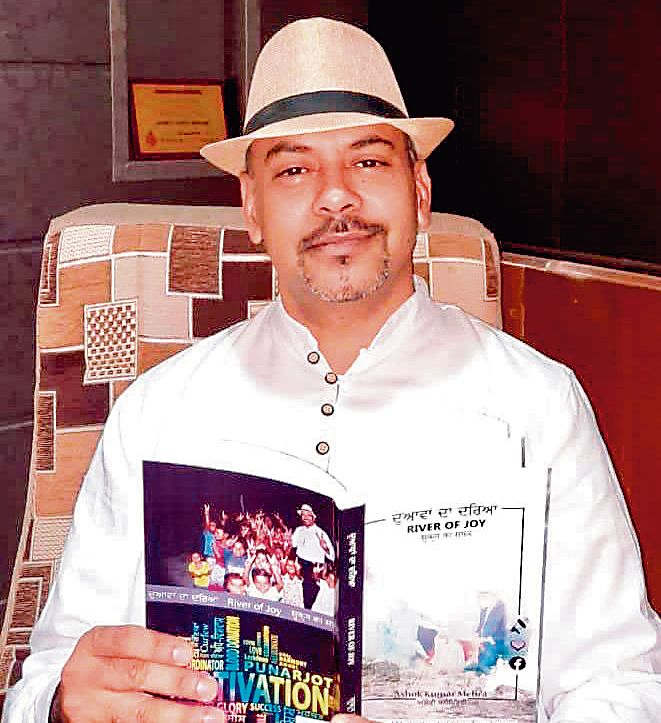 Having served humanity by organising over 500 free eye camps in Punjab and encouraging organ donations, UK-based NRI Ashok Mehra (51) is now writing a book titled ‘Rivers of Joy’. Through the book, Mehra, who hails from Phagwara, says that he intends bring forth 30 inspiration stories which he thinks people will enjoy reading. “These are my real-life experiences over the past 10 years of service. Each story will end with a motivational message for the reader”, he says. My 252-page book will come in three languages – English, Punjabi and Hindi so that it has a wider reach, he adds. The NRI is doing philanthropic works through NGOs ‘Punarjot Eye Bank’ and ‘Sight Saver Charitable Society’, he is working for. Recently, he also organised a state-level online speech contest for the students in which he engaged the students in current topics including ‘How to beat boredom in lockdown’ and ‘How to build immunity in lockdown’. Cash prizes will be given to the winners by Wednesday. Next project in line, he says, is an online music contest for the visually impaired students.

Three die of Covid-19 at Ashram

In a week’s span, three inmates from Shaheed Baba Deep Singh Ashram, Sahni village, here have lost their lives to Covid. The health teams have been daily making rounds here, collecting samples and keeping the inmates under supervision. Of the 146 inmates, 29 have tested positive for the infection. The positive patients have been moved to the Civil Hospitals of Phagwara and Kapurthala, said Covid nodal officer Dr Sumandeep S Parmar. Police teams too have been deployed to ensure that the inmates do not move out of the Ashram and stay largely confined in their rooms.

Vaccine shortage a cause for concern

The issue of vaccination continues to be a major political issue with leaders of all parties issuing statements on daily basis. Former Punjab minister and Punjab Agro Industries Corporation Chairman Joginder Singh Mann, who hails from Phagwara, has said that it was unfortunate that the country had slipped to 145th rank in imparting quality medical services to the people in this hour of crisis. He said it was double whammy for the countrymen as on one hand the PM has supplied around 6 crore vaccines to the other countries and on the other hand there is acute shortage of the vaccines in India itself due to which life of the people is in peril. Mann said instead of arranging the medicines for the people, the Prime Minister and his coterie had befooled the general public by enhancing the time line of vaccination. “It is total failure of the Modi government to deal with this crisis and country will never forgive the Prime Minister and coterie for this sin”, he added.

A BTech Biomedical Engineering student of Lovely Professional University Kunwar Sahi has won second prize at the prestigious national level ASB Ideathon competition-2021 held in Noida (UP). Near 200 competitors from all across the country had presented their innovative ideas and skills. The title of the winning start-up idea of LPU student was “NeuroX Technologies”. Sahi, set to be an entrepreneur, says that his idea was to help the community with mental health related issues. “It is a novel framework which will address such issues while being highly patient, specific and affordable. It will provide assistance to clinicians as well as patients. The victory in the contest has encouraged me to strive and develop it further to see my idea converted into a solid creativity.” tns

The daily new Covid-19 cases being reported across the world...