Vehicles stuck in a traffic jam; and (above) a snapshot of a Tweet condemning protest.

The four-hour long road blockade at PAP on Saturday afternoon by Punbus and Punjab roadways contractual employees to press their demands for regularisation and withdrawal of government’s decision to hire more contractual employees on outsource basis, has kicked up a social media storm with hundreds of city residents speaking up against the misuse of right to protest by blocking traffic.

If you were angry over the state govt, then hold protests outside the houses of ministers. Why are common people being harassed. — A City Resident

High-ranking police officials failed to clear the blockade. I heard protesters saying in front of police personnel that they won’t move. — Sahil Kapoor, A Resident 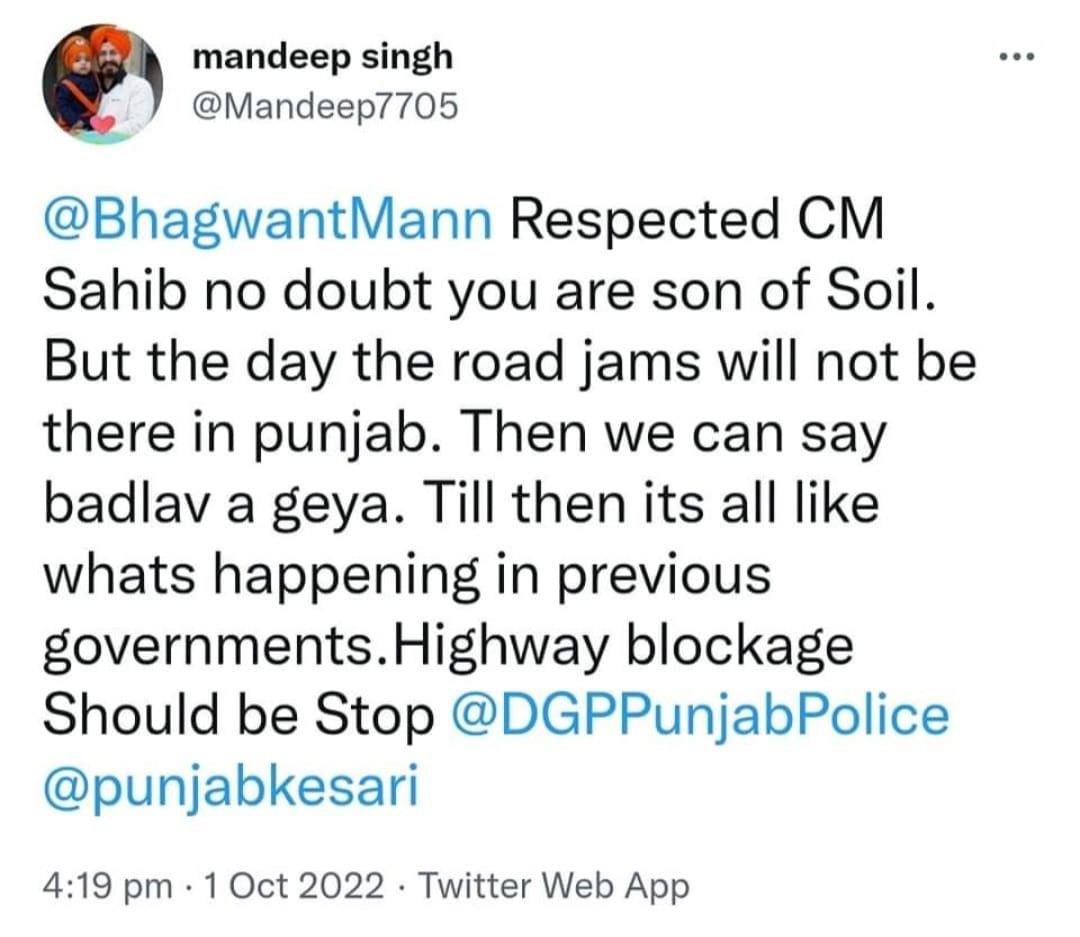 The residents also expressed resentment over the inability of the district administration and the police in handling the situation and failing to act against the protesters. They said the unannounced blocking of roads not only put mental pressure on commuters but they also face financial losses. Besides, the students suffered a lot and their parents had to rush to the spot to pick their wards.

“The road blockade by protesters had caused a huge inconvenience to the common public, especially to senior citizens and children. We condemn such protests, which puts the public at the receiving end. We demand strict action against the protesters”, said Prof MP Singh in his Facebook post.

He also took to Twitter to express his anger over frequent road blockades, and tagging Punjab CM Bhagwant Mann in his tweet. He wrote, “Respected CM Sahib, we know you are the son of soil. But the day when there will be no more protests on roads, only then we can say ‘badlav aa geya’. Till then it’s all like what was happening in the previous governments. Highway blockage should be stopped”.

Another city resident, without revealing her identity posted a message on a Facebook group, saying that her five-year-old son was stuck for two-hours in the school bus in the traffic jam due to the protest.

“The parents were forced to go pick their children from the spot. I want to ask these protesters what was the fault of these small children, why they were left to suffer like this? If you were angry over the state government, then hold protests outside the houses of ministers, MLAs or even CM. Why are common people being harassed?” she wrote.

Another resident Sahil Kapoor, said, “High-ranking police officials such as SP, DSP failed to clear the blockade. I am an eye-witness to the situation and heard protesters saying in front of police that they won’t move. Some students missed their exams, some missed their flights, even some were on their way to get their surgeries or operation done but they had to cancel their appointments. The Aam Aadmi (common man) is so helpless in Punjab.”

DC Jaspreet Singh said: “We will talk to the authorities concerned in the Transport department and accordingly an action will be taken”, he said. CP Gursharan Singh Sandhu said: “Blocking roads is undemocratic. We are holding talks with the authorities concerned and the district administration in this regard and proposing action to be taken against the protesters,” he said.