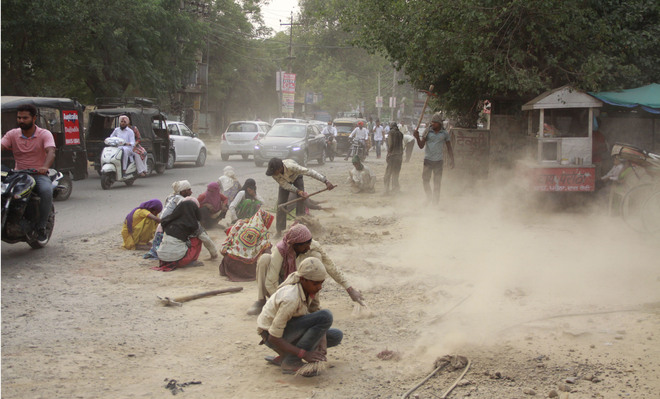 With 239 mark in the Air Quality Index (AQI), the air quality of Jalandhar, which recently got the tag of the most polluted Punjab district in an AQI survey, has taken a hit. At present, as per the AQI figures, the air quality in the city falls under the ‘unhealthiest state’.

This has raised the concern on the factors behind the air dilution. As per the Punjab Pollution Control Board (PPCB) zonal head, despite the fall in stubble burning cases, the air quality is in a poor state as compared to last year.

Throughout the day, the AQI ranges between the 160 and 250 mark. The highest mark is recorded in the daytime and it drops by the evening. On Tuesday, the AQI in most parts of the town was recorded 239. At 3 pm, on Wednesday, the highest AQI mark was 221. By the evening, with Particulate Matter 2.5, it dropped to 163.

The smoke emanating from farm fires has certainly downgraded the air quality. Besides, the dust on roads is also a major reason behind pollution.

In most of the city areas, the civic authorities and the administration have started constructing roads. Roads even in a motorable state have been dug for recarpeting, adding to the city’s woes.

MC councillors say the government is trying to complete the pending Smart City projects as Assembly elections are around the corner.

“It has become difficult to commute between Maqsudan Chowk and Patel Chowk. Roads are not cleaned even after re-construction. Gunny bags filled with debris and dust can also be seen scattered on the road,” said, Rahul Soni, a resident of Maqsudan. Another resident, Karan Singh, said, “Smoke and dust are certainly the prime reasons behind the increasing pollution.”

PPCB zonal head Tejinder Kumar said the dust on roads contributed majorly to the air pollution. “This has triggered various respiratory issues, exacerbating the problems such as lung cancer and many more ailments. Motor vehicle emissions, stubble burning and industrial activities are the other common factors behind pollution, affecting health of people, especially children,” he added.