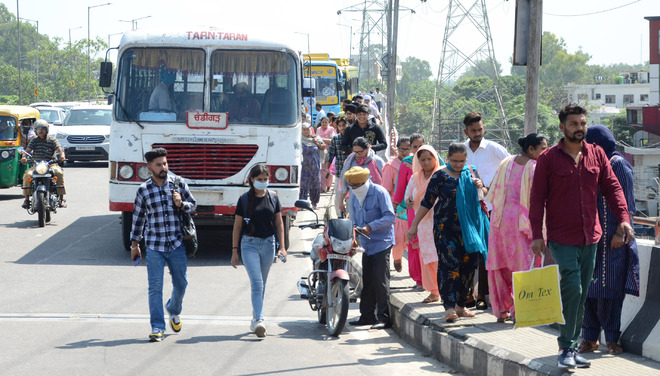 Passengers had a tough time and have to walk on roads with luggage due to PRTC & Punbus workers strike. Photo: Sarabjit Singh

Even as Chief Minister Charanjit Singh Channi announced on Thursday that he would regularise drivers, employees of Punjab Roadways, Punbus and PRTC, chose not to budge and went ahead with their strike from 10 am to

The protesters closed the gates and did not let any government or private bus enter or leave the bus stand. Buses coming from outside halted at a flyover near the bus stand and passengers had to walk with their luggage.

Preeti, a mother of two, who had come from Patiala, said, “Our bus stopped one km ahead of the bus stand. I failed to figure out where I was. There were no rickshaws around and I had to pick my luggage along with kids on the busy road.”

Private bus operators, too, had to pick passengers from outside the bus stand, which led to chaos in the area. The buses remained queued all around and passengers had to walk down a long distance to catch a bus to their destination. Even the traffic police personnel had to face a lot of difficulty in manning the traffic.

Sangeeta, who was heading back to Phillaur, said, “It is becoming increasingly cumbersome to travel on bus these days. Even though my ride has become free because of the state government’s policy, frequent strikes by employees have made travel very chaotic.”

Gurpreet Singh from the Punjab Roadways, Punbus and PRTC Contractual Employees Union, said: “We will not budge till the words of leaders translate into action. Chief Minister Charanjit Singh Channi has not said this for the first time. Even ex-CM Capt Amarinder Singh had been giving us assurances for over four years. We are 8,000 drivers, conductors and office duty staff, who are awaiting to be regularised. The day the process gets started, we will end our strike.”

After today’s protest, the bus stand will be shut once again in support of farmers who have announced ‘Bharat Bandh’ on September 27. On October 6, roadways employees have planned a gate rally. There would be three-day strike again from October 11 to 13. On October 12, some unions would be holding a protest outside the CM’s residence.