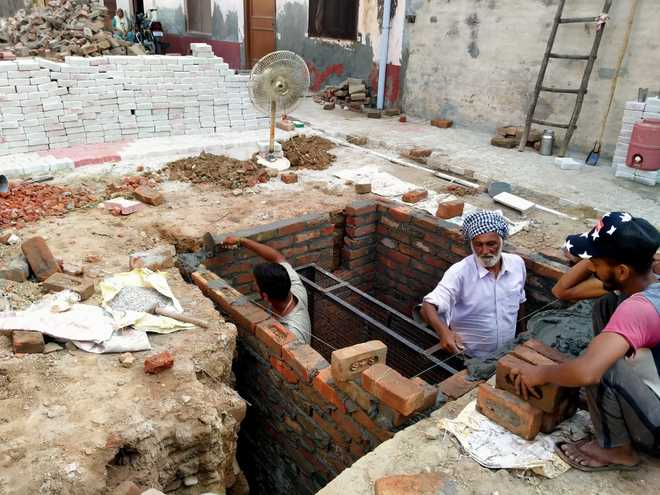 Rurka Kalan village in Jalandhar district has constructed a rooftop water recharge plant at a cost of nearly Rs 1.5 lakh and 19 more such plants are likely to come up in the village.

Prime Minister Narendra Modi in February made an appeal to people to start a 100-day ‘Catch the Rain’ campaign to conserve water ahead of the summer, but Rurka Kalan village in Jalandhar district had already constructed a rooftop water recharge plant at a cost of nearly Rs 1.5 lakh.

Seven houses have been connected to the plant. Set up outside an aaganwari centre in the village, the tank has a capacity to store nearly one lakh litre rainwater and is 80 ft deep to mix it with the groundwater. The unit has been installed with the joint effort of the nagar panchayat, youth Football Club (YFC) and NRIs from the village. At least 19 more such rooftop water recharge plants are likely to come up in the village.

Soil Conservation Officer, Jalandhar, Lupinder Kumar, said: “Rurka Kalan used to be in the dark zone category of the depleting water level. However, with the construction of rooftop water recharge unit and community ponds, the village has seen a turnaround. Besides, the model can be adopted in other villages to promote the conservation of natural water.”

The Pond Irrigation Scheme has also benefitted farmers in Rurka Kalan village. The village pond fulfil the irrigational needs of the nearby fields. While shrinking groundwater reserves and the treatment of sewage water remain prime concerns in the state’s depleting aquifers, projects like these deal help retain a healthy groundwater table.

In three simple steps — desilting, purification and filtration — the sewage water of the village gets collected in a huge pond, which is further pumped out for irrigation with the help of a pump run by 24 solar panels power.

Gurmangal Das, founder, YFC, Rurka Kalan, says: “As part of the action plan for ‘Mission 2024’, six more ponds to irrigate 800 acres through solar-powered uplifting devices and the laying of 5 km HDP underground pipelines are on the cards. In addition, 200 soak pits would be constructed. The total budget for these projects is estimated to be around Rs 3 crore.

Lupinder said, while the fund was collected by YFC and panchayat village, under the direction of Rajesh Vashist, Chief Conservator of Soil, we designed the models of water conservation for the village. “This was for the first time that there was optimum utilisation of local resources. The National Horticulture Mission also approved and appreciated the model,” he said.