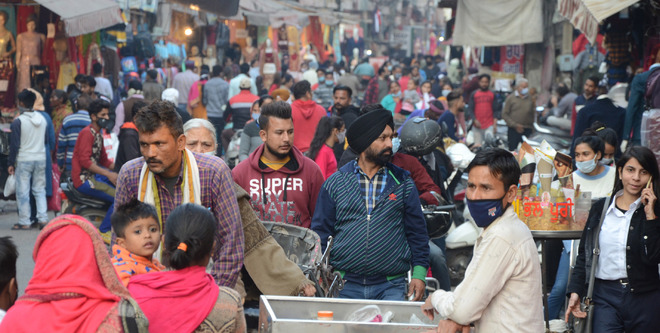 The police intensified the challan drive following the directions of the state government to hike the penalty from Rs500 to Rs1000 for not wearing masks.

Total Rs73,000 was collected as fine from 73 violators by the city police on Tuesday.

While the state has been struggling to contain the surge in Covid cases, the decision to raise the penalty amount has not gone down well with residents it seems. After the announcement by the Chief Minister to double the penalty amount for not wearing masks, and imposition of night curfew, last week, locals have already started voicing their opinion on social media citing various reasons.

Roshandeep Singh, a shopkeeper at sports market, said: “How can the government expect residents to pay Rs1,000 for not wearing masks and following social distancing? In several rallies and protests, even political leaders forget to wear masks and maintain a 5-metre distance. Increasing the fine will only lead to unnecessary confusion among residents. It’s better to raise awareness and sensitise people for Covid threat by adopting other means.”

Likewise, Akash, a student said, most people are not in a position to pay the heavy fine and the government move would lead to corruption as violators would be let off by officials after taking bribes.

Meanwhile, ACP headquarters Bimal Kant said: “The police appeals to residents to always wear a mask before entering any public space, as it will not only save them from paying the fine, but also limit their chances of contacting the virus. Rs73,000 was collected as fine till 5 pm on Tuesday.”

As per the official data, as many as 47,496 people were fined Rs2.30 crore till mid of October for not wearing masks since the lockdown was imposed. Commissioner of Police Gurpreet Singh Bhullar on Tuesday ordered field officers to take strict action against those violating the night curfew imposed by the state government to contain the spread of novel coronavirus.

Bhullar issued stringent instructions for all field officers to ensure that there must not be any movement of individuals and non-essential activities between 10 pm and 5 am on roads. He said all hotels, restaurants, marriage palaces and other hospitality units must close by 9:30 pm.

However, it has also created confusion among people, who had booked hotels and marriage palaces prior to the night curfew was announced. Finding themselves at the receiving end, the affected individuals said it was difficult to shift marriage dates, considering it was the peak marriage season.