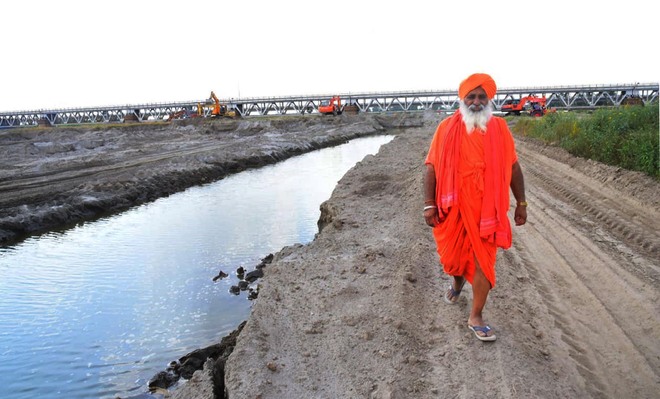 The DC handed over a cheque for Rs1lakh under the corporate social responsibility (CSR) funds to renowned environmentalist Sant Baba Balbir Singh Seechewal as a minuscule contribution in the ongoing work of desilting of railway overbridge at Gidderpindi.

Jalandhar Deputy Commissioner Ghanshyam Thori on Thursday said the district administration had roped in private players to provide financial assistance to individuals/non-governmental organisations coming forward for the service of society.

The DC handed over a cheque for Rs1lakh under the corporate social responsibility (CSR) funds to renowned environmentalist Sant Baba Balbir Singh Seechewal as a minuscule contribution in the ongoing work of desilting of railway overbridge at Gidderpindi.

Assuring support and cooperation to Seechewal in the desilting of railway overbridge at Gidderpindi, which would help in averting the danger of floods in the region, Thori said the administration and people could never repay the service rendered by him for this task.

However, he said this money was a humble contribution by administration and private players to contribute in this Herculean task. Lauding the role played by Seechewal in desilting the 12 spans of railway over bridge in Gidderpindi, he said the desilting under the railway bridge was the need of the hour to prevent any damage by the floodwater in the coming times.

The DC said Seechewal had performed this exemplary task with the support of people, which hardly have any parallel. He said the district administration would support the services of such individuals/NGOs, who come forward with such tasks.

Thori said he had already asked the Sub-Divisional Magistrates of Jalandhar to identify such individuals so that their contribution could be duly acknowledged through such gestures.