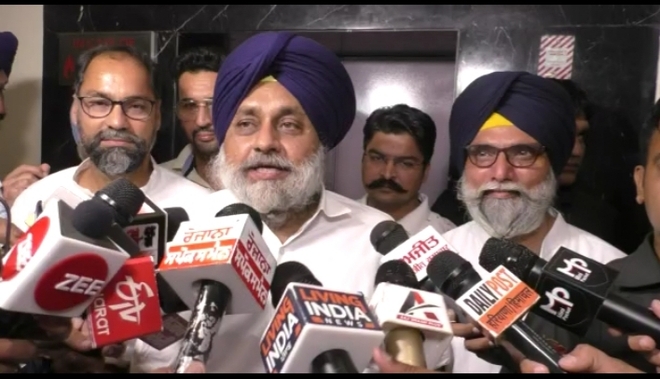 Calling in a joint meeting of SAD-BSP leadership of Doaba and planning an aggressive campaign at a time when the Congress is facing turmoil, SAD chief Sukhbir Badal today announced two programmes for Jalandhar in the coming days.

On October 5, he will hold an interactive, mass contact session with the city residents. “He will meet the people from various walks of life. He will take their suggestions and consult them on various issues affecting them. There will be no big speeches. Ex-minister Harsimrat Badal too would accompany him for the event”, said the party leaders who attended the meeting.

Sukhbir announced that programmes in this pattern would be held through the state in October. He told the candidates to start door-to-door campaigns and start booth-level planning. He also announced to form a coordination committee that would liaison between the SAD and BSP in the event any issued cropped up between the workers of the two parties in the ongoing campaign.

Both the parties also announced to hold a state-level function on the occasion of the death anniversary of BSP founder Kanshi Ram. The function has been planned for October 9 at a site near DAV University on Pathankot Road.

Incidentally, Sukhbir is learnt to have been holding the meeting when the reports of PPCC chief Navjot Sidhu quitting the post started appearing. Sukhbir told the party workers to make the most of the mayhem in the ruling party and take on campaign for the alliance well.