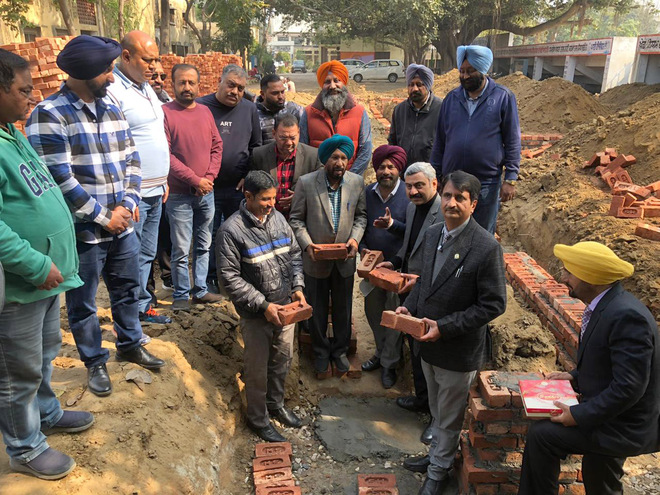 MLA Balwinder Singh Dhaliwal among others lays the foundation stone of a room at a school in Phagwara.

All district schools to be smart by March

Phagwara MLA S Balwinder Singh Dhaliwal on Thursday said by March, all 782 government schools would be converted into smart schools. He said while so far 728 schools in the district had been made smart schools. The MLA said while there was a 17 per cent increase in admissions in the government schools, parents were placing more trust in government education. He laid the foundation of new rooms being constructed at Government Senior Secondary School for Boys in Phagwara. He also said officials had been directed to purchase furniture, desks, sports equipment for schools. He was accompanied by officials, including school Principal Ranjit Kumar.

The smart village campaign and MNREGA provided employment to more than 25,000 people in the Covid-hit financial year 2020-2021. It had given a big push to the overall development of the villages across the district. The district administrations said under the ‘Smart Village Campaign’, the Thapar model ponds is a unique project which not only provides the water for irrigation but also gives clean atmosphere in villages. While 20 playgrounds had been completed under the project, 17 solid waste management projects would also be started. In the works of construction playgrounds – which started few months ago – as many as 20 out of 25 playgrounds in the district were completed with open gyms facilities at a cost of Rs 85.23 lakh. Besides, 17 solid waste management projects in the district would also be started for the preparation of organic manure from garbage and eight more works would be started in the next few days. Under the project, garbage would be collected and separated from the houses, followed by making organic manure from waste. Regularly reviewing the projects under the ‘Smart Village Campaign’, Deputy Commissioner Deepti Uppal said 10.05 lakh mandis had been generated so far in the year 2020-21 with expenditure of Rs 3019.11 lakh, she added.

Under ‘Ghar Ghar Rozgar and Karobar Mission’ the overseas education and placement cell has been set up by the Department of Employment Generation Skill Development and Training at Kapurthala DAC in which free counselling would be provided to the youth seeking study or employment abroad. DC Deepti Uppal said the first batch of counselling would be from March 1 to 31 and registration for foreign counselling done from February 21 to 25. During the counselling, candidates would be provided transparent and clear information about going abroad so they do not face any difficulty in going abroad. Candidates belonging to Kapurthala district who wish to study abroad can register at District Employment and Business Bureau Kapurthala link https://tinyurl.com/foreign studlykpt and those who wish to study abroad can visit https:// can register at the link /tinyurl.com/foreignplacementkpt. Besides, candidates can register in person at the DAC, Kapurthala, the destination of District Employment and Business Bureau, Kapurthala, or contact helpline number 98882-19247.