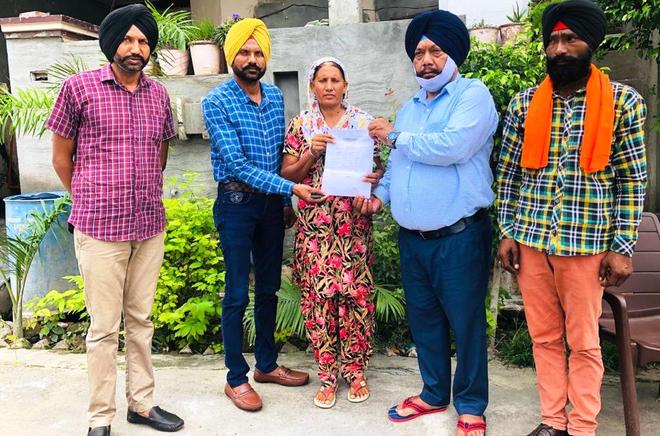 Members of the Punjab SC Commission with family members of deceased Baljinder Singh.

Taking cognizance of the report published in these columns, Dr Tarsem Singh Sialka, member, Punjab State Commission for Scheduled Castes (SC), on Sunday visited the family members of the victim (Baljinder Singh, alias Ballu), who was beaten to death at an illegal drug de-addiction centre in Kartarpur a few days ago.

Sialka said to provide justice to the family members, who lost their young son, a notice was also issued to the IG, Jalandhar Range, regarding the case (number 118 dated July 18) registered at the Kartarpur police station and the status report of the case is sought to be submitted by the police on August 20.

The commission assured that it would provide help to Balbir Kaur, a resident of Kapurthala, and appealed to the police for early arrest of the accused. “The accused, Sukkha Nihang, had approached the family members of Baljinder Singh, alias Ballu, last month and kept him at his de-addiction centre for nearly 10 days. On July 18, he along with other staff members of the centre hit him brutally, which led to his death. As per sources, though two-three criminal cases were already registered against Sukkha, he was running the centre openly. Therefore, the police need to swing into action immediately,” added Sialka.

“On the basis of the statement of the victim’s mother and another injured victim Hardeep Kumar, we have booked Ravi Baba, a resident of Malsian, and Baghi Nihang and Palwinder Singh, alias Bhinder Nihang, both residents of Pattarkalan village. A raid was on Sunday conducted to trace the whereabouts of all the accused, who have been booked under Sections 302, 34, 323, 342, 148 and 149 of the IPC.

In addition, a three-member medical board, in its postmortem report also confirmed brutal injuries as the cause of death, added the SHO.