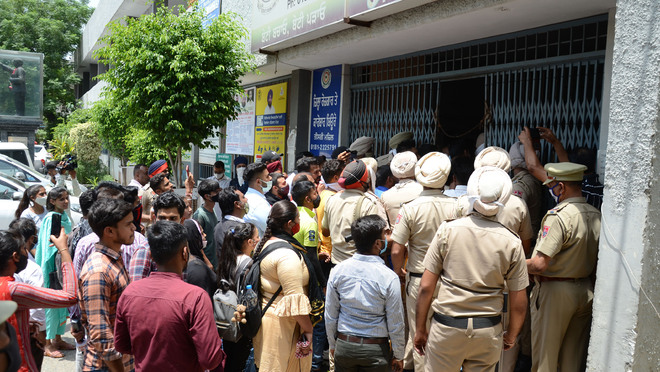 SC students hold the protest outside the DC office in Jalandhar on Tuesday. Sarabjit Singh

“Aren’t they ashamed of themselves and can’t they see that at this age, students are holding dharnas instead of studying,” said enraged SC students today as they protested against the Joint Association of Colleges (JAC). Notably, the reports of the decision taken by the Joint Association of Colleges (JAC) of private educational institutions to withhold roll numbers of 2 lakh Scheduled Caste (SC) students have irked the students, after which around 100 students gathered and held a protest. 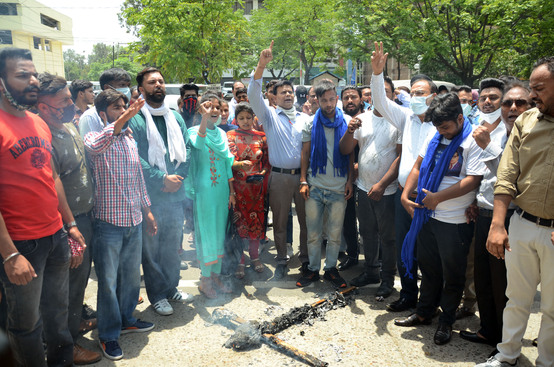 Notably, the JAC has taken the decision in protest against non-disbursal of crores of rupees under the SC post-matric scholarship scheme by the state government.

Navdeep Dakoha, president, Students’ Sangharsh Morcha, who was leading the protest, said the association had taken the decision of withholding the roll numbers as they wanted to build a pressure on the state government, but that did not mean that the students would be used as ladder. Asked about the withholding of the roll numbers of students in Jalandhar, he replied, “It is not that the roll numbers are withheld yet, but the announcement by the association has not gone down well with the students, which is why we have taken this step,” he said.

Dakoha said of 365 days, they were forced to go on streets for 100 days, how were they supposed to compete. “Not studying even for a single day can lead to a backlog, you can imagine our state, we are always busy in holding protests,” he said.

The students met Additional Deputy Commissioner (General) Jasbir Singh. The ADC said, “I have assured the students that we will not let any institute refuse their roll numbers. If anyone does it, we will take strict action against them,” he said, adding that the students were apprehensive that the colleges might refuse to give their roll numbers in future after the announcement.

Gurpinder Singh Samra, president of the Principals’ Association, GNDU, said this time (from 2020-2021), students would receive scholarships in their accounts. “I don’t believe in this way of withholding student’s roll numbers. It is not right, but at the same time the government must understand that they release the amount of the previous three years too,” he said.

Taking a serious view of the decision taken by the Joint Association of Colleges (JAC) of private educational institutions to withhold roll numbers of 2 lakh Scheduled Caste (SC) students, the National Commission for Scheduled Castes on the orders of its Chairman Vijay Sampla had issued notice to the Punjab Government asking them to ensure the immediate release of the roll numbers.

Under the scheme, the SC students are given scholarships in their accounts. Sixty per cent is given by the Centre and the remaining 40 per cent by the state government, after which students pay the fee to the college.

As per the information, the government has not given the scholarship before 2020 to the students in their accounts, because of which the colleges are not getting their fees.