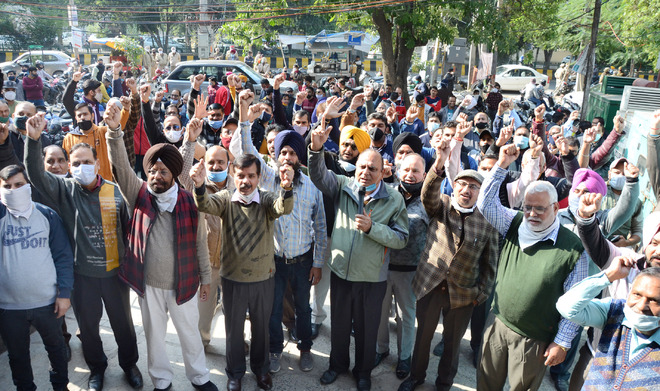 It was a day of protests in Jalandhar. Numerous associations held dharnas in various parts of the city to safeguard their rights and be heard the government and authorities concerned.

A large number of SC/ST students gathered outside HMV College and raised slogans against the management for demanding fee. The Punjab Roadways permanent and contractual workers protested at depot number 1.

Anganwadi workers up in arms, flay ‘anti-people’ policies of government

About 2,500 bank employees and officers, at the joint call of All India Bank Employees Association (AIBEA) and All India Bank Officers’ Association (AIBOA), observed a complete strike due to which the banking activities were entirely halted. About 300 bank branches of the Jalandhar City and 650 branches in the district remained closed on the account of strike.

The strike was held to oppose the drastic changes in the labour laws. Amrit Lal, secretary, Punjab Bank Employees Federation (PBEF) said, “Under the new laws, unions cannot go on a strike if the matter is still in conciliation, referred to tribunal or arbitration. So, with these rules, we will not be able to hold strikes,” he said.

The protesters also said formation of unions would also be difficult, because now at least 100 employees should apply for registration of union, while earlier, it was only seven staff members. The unions are also opposing the merger as well as privatisation of banks. They are also strongly opposing the proposal of the RBI to give bank licenses to corporate houses for opening of private banks.

Addressing the rally, Amrit Lal said it was unfortunate that the government was trying to privatise PSUs and going ahead with dismantling the same.

A day after the district administration announced the opening of the portal for availing Dr BR Ambedkar Post-Matric Scholarship Scheme for the registration, a large number of SC/ST students today held a protest outside HMV College. The students alleged that the college management was demanding fees from them for the admissions.

As many as 400 students kept the roads outside HMV College blocked for nearly 3-4 hours and staged a dharna on the road leading to the Workshop Chowk. The vehicular traffic remained hindered till late evening hours. The traffic was also diverted to other routes.

After failing to get any response from the college management, students moved to MP Santokh Singh Chaudhary’s residence and intensified their protest.

Navdeep Dakoha, President, Student Sangarsh Morcha, said, the management at HMV College was pressurising students to pay the fees, which forced them to hit the roads. “Despite paying Rs 7,000 during admission, the colleges have been demanding fee from the students of the minority community, who have enrolled themselves under the scheme, to pay additional Rs 4,000 as university fees,” added Dakoha, a student of MA Punjabi of Layalpur Khalsa College. Similar allegation was also levelled by DAV College students.

The Punjab Roadways Sanjhi Action Committee today held protest at Jalandhar Roadways Depot -1. Permanent and contractual workers protested against the merger of Punjab Roadways into the PRTC and recommendations of the Montek Singh Ahluwalia Committee.

As a mark of protest, the staff would keep buses of the road for 24 hours. Agitating against the policies of the Transport Department, leaders of the committee said the government was moving ahead with privatisation. “There is a monopoly of private buses in time-table and roadways buses have been given fewer routes. This is causing huge loss to Punjab Roadways. Besides, the demands of workers have not been fulfilled,” said Baljit Singh, general secretary, Punjab Roadways Permanent Workers’ Union.