Baruni Arora of Jalandhar and Pratibha Sharma of Ludhiana, both 14-year-old, have never met each other in the past nine months ever since they conceived the idea of writing a novel together 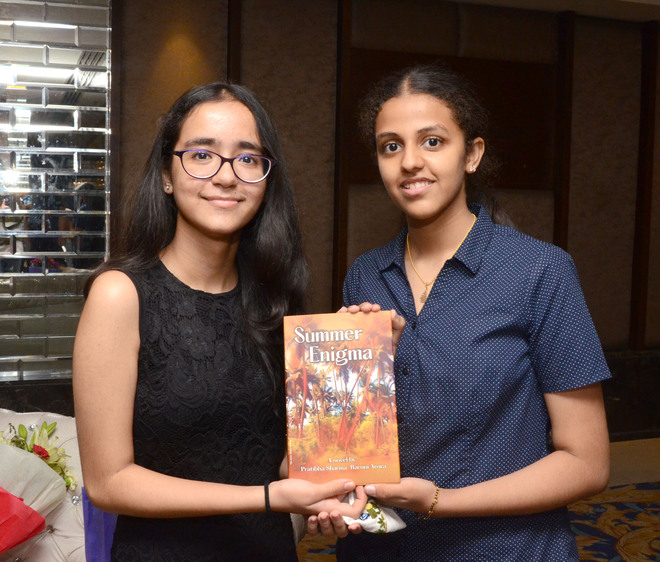 All of 14 years, two girls – Baruni Arora of Jalandhar and Pratibha Sharma of Ludhiana – have jointly penned a novel, which is a murder mystery. The most interesting part is that two of them have never met each other in the past nine months ever since they conceived the idea of writing a novel together, planning its plot and jotting it down into a 116-page novel ‘Summer Enigma’.

At a book release function here, Baruni and Pratibha shared, “While our friends used to play online games and indulged in unnecessary chats with their friends to break their monotony during the lockdown period, the two of us were happily engaged in the productive work.”

Asked how the two came across with the idea, they shared, “We were both very fond of reading novels of Agatha Christie and used to share stories of her murder mysteries. Discussing her novels, it struck to us if we too could begin to write something of the sort. We discussed the plan with our parents and they readily agreed and we started on. We used to daily discuss the ideas on our Zoom meeting. There used to be daily additions and deletions till the time we both were satisfied with the final output.”

About the novel story, they said, “The plot is based in Goa. Four friends are on a tour and they come across a murder incident and begin its investigation just out of curiosity. The two of them had their fathers as detective agents. This is the main idea around which the story sets in.”

Both Baruni and Pratibha were students of Delhi Public School till the last year and the best of friends for almost two years. The duo got separated when Pratibha’s father, Varinder K Sharma, who was posted as Deputy Commissioner in Jalandhar got transferred to Ludhiana. Baruni’s dad Manhar Arora is working as MD at the St Soldier’s Group of Schools here.

Manhar praised his daughter saying, “I knew that she had good writing skills since the beginning. Since she was a Class III student, she would pen poems for me, my wife and her elder sister on all special occasions including our birthdays and anniversary. I never knew that this skill in her would make her a novel author one day.” His daughter reciprocated saying, “I got the writing genes from my dad, who himself writes too well.”